MICHAEL B Jordan was proud to attend the Oscars with his mother.

The Black Panther actor walked the red carpet at Los Angeles’ Dolby Theatre on Sunday with his beloved mother Donna and admitted he was worried he’d get into a “fight” because she looked “so pretty”.

He shared a photo of them together on Instagram and wrote, “My mama about to make me have to fight somebody she looking so pretty. #Oscars2019#PopsIGotYou #DateNight (sic)”

And the 32-year-old actor wasn’t the only star joined at the Academy Awards by their mother.

Charlize Theron urged her mum Gerda to join her while she was interviewed by E!’s Live From the Red Carpet host Ryan Seacrest. Bradley Cooper was accompanied by both his partner Irina Shayk and mum Gloria Campano, while Amy Adams was joined by her mother and her sisters.

Roma actress Yalitza Aparicio held her mother’s hand as she walked the red carpet, while Regina King paid an emotional tribute to hers when she accepted the award for Best Supporting Actress for her role in If Beale Street Could Talk.

After sharing a moment with her mum after her name was announced, Regina took to the stage and said, “To be standing here, representing one of the greatest artistes of our time, [author] James Baldwin, it’s a little surreal. James Baldwin birthed this baby, [director] Barry you nurtured her, you surrounded her with so much love and support and so it’s appropriate for me to be standing here because I’m an example of when support and love is poured into someone.

“Mum, I love you much. Thank you for teaching me that God has always been leaning in my direction.”

Rami Malek’s mother also accompanied him to the ceremony and he thanked her and his late father as he picked up Best Actor for his work on Bohemian Rhapsody. – BANG! 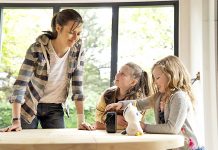