TULTITLÁN, MEXICO (AFP) – Every day Mexicans with suspected coronavirus infections seek treatment at the small clinic of Erika Reyes, one of thousands of community-based doctors helping to prevent the country’s health system from collapsing. With both public and private hospitals struggling to cope during the pandemic, Mexico’s neighbourhood physicians are busy dealing with the overflow.

“We can treat COVID-19 cases here so that the health system doesn’t become overwhelmed,” the 30-year-old told AFP.

Reyes was herself infected with the virus, but after recovering she continued working.

She now treats about 30 patients a day, most of whom have COVID-19, in her private clinic in Tultitlan near Mexico City using the recommendations of the government and colleagues.

Reyes said she feels “very, very, very unprotected” because vaccination has only been offered to health workers in the public sector so far.

Outside her clinic patients queued up waiting their turn, while an assistant offered hand sanitiser and checked the temperature of people entering.

In Mexico, 43 per cent of general medical consultations occur in private clinics, according to the pharmacies and clinics association (UNIFACC). 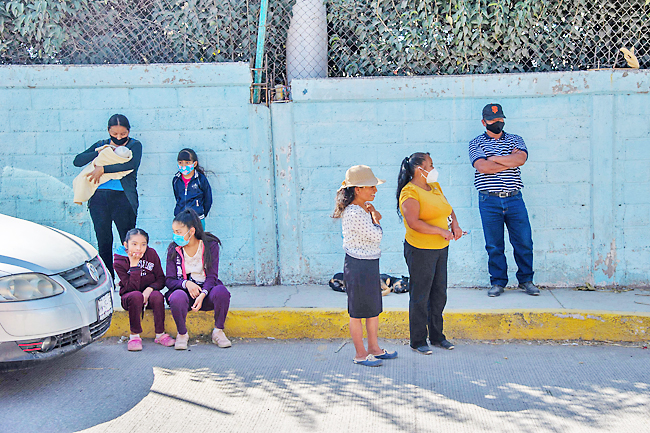 “We give 180,000 consultations a day,” said its president, Oscar Zavala. Many community-based doctors work from a small office attached to a pharmacy.

Mexican health workers have paid a high price during the pandemic: 2,687 of them have lost their lives, of whom nearly half were doctors and around one-fifth were nurses, according to official figures.

UNIFACC has reported the deaths of 32 doctors and 48 pharmacists among its members, as well as 186 relatives who became infected. The overall figure could be higher, since there are 18,000 clinics attached to drugstores around the country. One big appeal of neighborhood doctors is that a consultation costs around MXN35-100 (USD1.7-5.0), compared to MXN200-500 in larger clinics.

In the early days of the pandemic Karla Montano used to see perhaps a couple of confirmed Covid patients a week.

She offers consultations in her small office, by video call or through home visits wearing full personal protective equipment in Mexico City.

Some of her patients said they avoid going to public hospitals for fear of dying there, separated from their families.

Montano said the pandemic has left her exhausted because coronavirus patients can call any time day or night.

“It’s really hard as a doctor to have to stay strong in this situation, and having to appear strong to people is a heavy burden, because a doctor can’t have a breakdown,” she said.

Community-based doctors want to be included in the first phase of the government’s vaccination programme, which has given priority to front line health workers

in public institutions. “I want to keep working and supporting my community,”

said Montano. “But I need to be vaccinated so I can continue working without putting my family at risk.”