MADRID (AFP) – Lionel Messi put his arm around Ilaix Moriba, the 18-year-old born in the same year Messi made his Barcelona debut and who was now being given his own chance to play for the club’s first team.

Ilaix had just set up the opening goal against Alaves on Saturday when he was congratulated by his 33-year-old captain, whose task is to lead a youthful Barca to an unfancied victory against Paris Saint-Germain (PSG) in the Champions League last 16 early tomorrow (4am Brunei time).

From nurturing the next generation of Barcelona talents to confronting one of Europe’s richest, most ambitious clubs, the fork in the road for Messi’s future is becoming clear.

PSG may not be Messi’s preferred choice this summer, especially if Manchester City decide the Argentinian is the final piece of the jigsaw for a team already ahead of the rest in the Premier League.

But the two clubs remain his most realistic destinations, both united in representing almost everything that staying put at Barcelona would not. Clubs ready, in theory, to win the biggest trophies immediately and able to spend whatever it takes to do it.

As it stands, Koeman’s team sit third in La Liga, eight points behind Atletico Madrid. They were beaten by Athletic Bilbao in the Spanish Super Cup and trail Sevilla 2-0 after the semi-final first leg of the Copa del Rey. 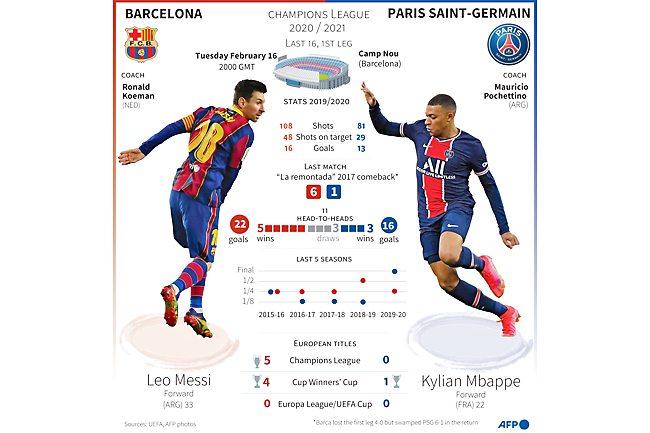 Yet Barcelona stabilised under Koeman – never perfect and always far from the finished article – but with a renewed sense of purpose emerging.

Koeman has enabled struggling players to flourish and promising youngsters to shine.

Pedri, the 18-year-old attacking midfielder, has stood out, his eye for a pass chiming with Messi’s quickness of thought.

“In Pedri, Messi has found a reason to enjoy the game again,” wrote Diario Sport in January.

Ansu Fati sparkled before injury struck last November while in defence, the 21-year-old Ronald Araujo, who is also expected to miss the first leg with an ankle problem, emerged as Koeman’s most reliable central defender.

Frenkie de Jong has excelled in recent weeks and Ousmane Dembele is enjoying his best spell at the club so far. Messi, like the team, has looked happy.

“He is focussed, he is happy, he has found that ruthless streak again,” said Koeman.

Excitement may prove misplaced or, at least, premature given there are no guarantees Barcelona’s depleted defence will not cave against PSG and Kylian Mbappe, even with Neymar absent.

Another humbling in Europe may not undo the good work Koeman has done but it would serve as a painful reminder to Messi of past failures and ground to make up.

Yet for all that, PSG coach Mauricio Pochettino must know elimination at the hands of Lionel Messi and co would be a huge setback for him so early into his reign in Paris.

He has won eight and drawn one of 10 games so far, but none of the teams he has come up against yet are near the level even of the current Barcelona.

The absence of Neymar is an enormous blow, especially when added to that of Angel di Maria. Marco Verratti is a doubt, and Pochettino is still trying to put his stamp on the team.

Kylian Mbappe, with four goals in Pochettino’s 10 games, has not consistently produced his electrifying best for some time. The new coach has chopped and changed formations too.

“We want the team to be confident playing in different systems, but it’s not always easy to get a lot of work done in just 40 days,” he insisted after Saturday’s win against Nice.

“We have to be ready, and the team will be ready.”