The introduction of new hiking trails is part of the initiative by the Kampong Kilanas Village Consultative Council (MPK). In addition, their approach includes encouraging hikers to be aware of the safety aspects, especially during bad weather conditions and heavy rains.

At the entrance to the hiking trails, a signboard displays a safety advisory while Doa Masuk Hutan is provided as a reminder to visitors.

Kampong Kilanas Acting Village Head Haji Ameerulbahrynee bin Haji Awang Abdul Hamid explained that the park has been open to the public for quite some time, but the official unveiling only took place on January 3. 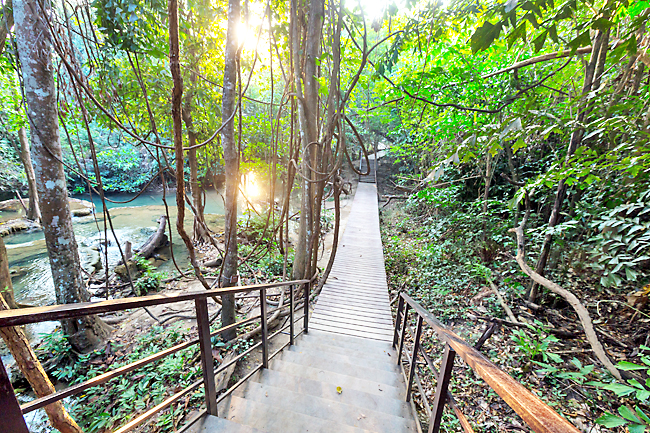 He added that what drove the MPK Kampong Kilanas to work on the park was more than providing a hiking venur; it had the potential for further development, such as planing of fruit trees by volunteers to add value to the park.

The acting village head added that in August 2020, paperwork on the TRBD project was prepared, following discussions among the MPK Kampung Kilanas members.

The paperwork was submitted to the Brunei-Muara District Office to turn the recreational park into a One Village, One Product initiative for the MPK. By September, the project was coordinated according to the role and function of MPK Kampong Kilanas.

It was hoped that members of the MPK would manage the park while overcoming the challenges that may surface in a bid to keep its operations running.

“TRBD needs to be constantly upgraded; not only its surroundings but also the implementation of facilities that have the potential to become tourist attractions, as included in the paperwork,” he said.

Mohd Yussof to invite the public to contribute towards further beautifying of the park and adding facilities that could enhance the amenities.

The official opening also saw activities, including the ‘Wang Kamaauddin Challenge’. According to the elder, Wang Kamaauddin was a legendary gallant warrior from the Kedayan descendants who lived in the village. For the challenge, participants underwent three tests – carrying heavy wood, 30 sit-ups and carrying a Tumpo Air, which is made from a large, thick bamboo and used by the Kedayan to carry water.

The minister, meanwhile, advised hikers and the public to practise safety at the park.

According to a volunteer, prior to entering the park, hikers need to jot down their phone numbers in case of an emergency.

The public is also urged to practise cleanliness at the park.