THE WASHINGTON POST – Kue nastar is a filled pastry popular in Indonesia at Tahun Bahru Imlek (Lunar New Year) and other holidays, such as Lebaran (Eid Mubarak) and Hari Natal (Christmas). Kue means cake, and the Dutch-influenced treat gets its name from the Indonesian word for pineapple nanas and the Dutch taart, hence nastar.

In Southeast Asia, people often make or buy the tarts to celebrate the new year.

Cookbook author Pat Tanumihardja learned how to make the bite-size pastry from her mother’s friend, tante (meaning “aunty”) Linda Lee. Using Lee’s recipe as a foundation, Tanumihardja developed her own version, which uses salted butter, as well as a blend of all-purpose flour and cornstarch for a melt-in-your-mouth pastry.

Make Ahead: The filling needs to be made at least eight hours, and the dough, at least 30 minutes, in advance of baking the tarts. 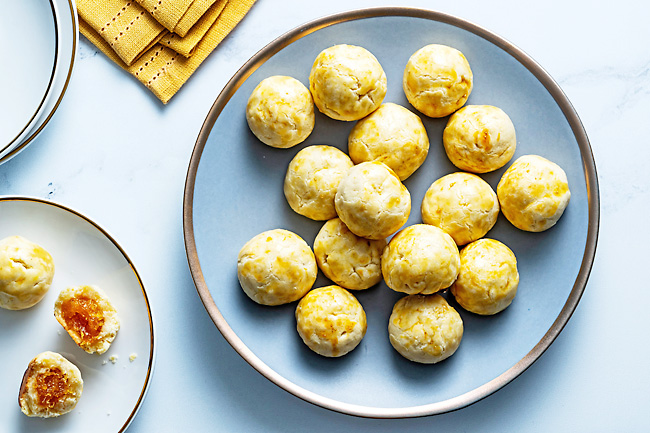 Make the pineapple filling: In the pitcher of a blender, process the pineapple until it forms a coarse puree, making sure no large chunks remain.

In a 12-inch heavy-bottomed skillet, or a large pot, such as an eight-quart Dutch oven, over medium-high heat, combine the pineapple puree, sugar, cinnamon and cloves and bring to a boil. Decrease the heat to medium-low, so the mixture is at a gentle simmer, and cook uncovered, stirring occasionally, until it turns dark tan and is thick, one to two hours. The mixture should be thick enough to roll into balls.

Stir more frequently in the last 30 minutes of cooking to prevent the bottom from burning, reducing the heat if necessary. If the mixture starts to burn, add water, one teaspoon at a time, scraping bits from the bottom of the pot.

Remove from the heat, let cool to the touch, about 15 minutes, discard the cloves and cinnamon stick, and transfer to a lidded container. Refrigerate for at least eight hours and up to one week. You should have about one one-third cups (about 380 grammes).

Make the dough: Into a medium bowl, sift the flour and cornstarch.

In a large bowl and with a flexible spatula, stir together the butter and condensed milk until combined. Add two of the yolks and stir until well combined. The mixture will be lumpy.

Add the flour mixture in batches, mixing it in with the spatula. When about two-thirds of the flour has been added, the mixture will seem very dry and as if it is not coming together.

Working now with your hands, continue to add the flour and work the dough together until it becomes smooth, soft to the touch and pliable. Gather the dough into a ball, wrap in plastic wrap and refrigerate for at least 30 minutes and up to two days.

Assemble the tarts: Position a rack in the middle of the oven and preheat to 350 degrees.

Line two large, rimmed baking sheets with parchment paper. In a small bowl, whisk together the remaining egg yolk, honey and water for the egg wash.

Divide the dough into four equal pieces; each piece should weigh about 240 grammes.

Divide each section into 12 pieces, about 20 grammes each, and roll into balls. You should wind up with 48 balls. Do the same for the pineapple filling with each ball weighing about eight grammes; it helps to scoop it using a one-teaspoon measure.

Place a dough ball in one hand and flatten with the edge of your other palm to form a circle about two inches in diameter. Place a ball of filling in the centre, and fold the edges of the dough over and around the filling, then roll it into a golf-ball-size ball.

Arrange the tarts one-inch apart on one of the prepared baking sheets. Repeat with the remaining dough and filling.

Brush the dough balls with the egg wash. Transfer one sheet to the oven and refrigerate the other. Bake for 18 to 20 minutes, or until golden brown, rotating halfway through baking.

Transfer the tarts to a wire rack and let cool completely. Repeat the baking and cooling with the remaining tarts.