The vote in the lower Chamber of Deputies was 235 in favour of her coalition government and 154 against, while there were five abstentions. The coalition needed at least 195 votes for a majority.

Earlier on Tuesday in the Chamber, Meloni laid out her government’s policy aims, firing back at domestic and foreign critics who are worried that her far-right politics might undermine European unity or the civil rights of Italian citizens.

She criticised the European Union (EU) for not always being ready for challenges, notably the dramatic energy crisis now threatening households and businesses. But she pledged that her four-day-old coalition government, which includes right-wing and centre-right allies, would stay loyal to EU accords, while working for reforms, including on monetary rules.

“To pose these questions doesn’t mean being an enemy or a heretic but a practical” person, Meloni said in a 70-minute speech.

She bristled at critics, including those from foreign governments, who have said they would keep a “vigilant” eye on Italy’s first far-right-led government since the end of World War II. 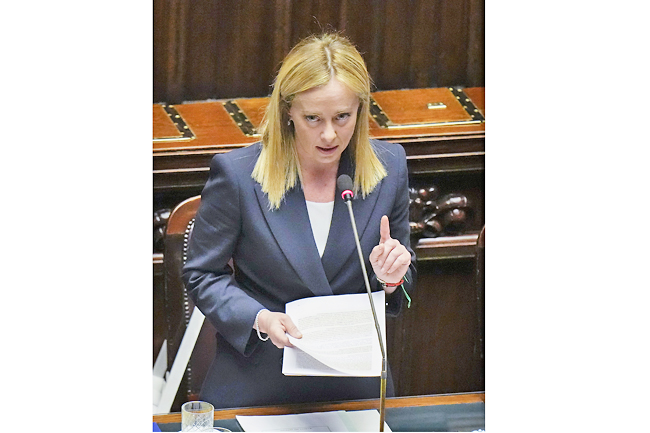 Such attitudes are tantamount to “a lack of respect for the Italian people, who don’t need lessons”, Meloni said.

The premier’s 10-year-old Brothers of Italy party was the top vote-getter in Italy’s parliamentary election last month, winning 26 per cent of the ballots cast.

With the confidence votes out of the way, Meloni will be able to get down to the business of governing. Meloni, 45, voiced awe at becoming the first woman to govern Italy and acknowledged the weight of that responsibility “toward all those women who face heavy and unjust” burdens in balancing family and work.

She expressed determination to “break the heavy glass ceiling that’s on our heads”.

Meloni recited the first names of women in Italy with great achievements, including a Communist politician who was the first woman to be elected president of the Chamber of Deputies, an astronaut and a Nobel-prize-winning scientist.

Meloni spoke with United States (US) President Joe Biden, who offered her his congratulations and underscored the strong relationship between the US and Italy.

To boost Italy’s birthrate, one of the world’s lowest, cities and towns should operate free day-care centres and nursery schools that stay open during business and store hours, she said.