ANN/THE STAR – There are only a handful of batik block makers in the East Coast and Kelantanese master crafter Md Ghani Mat is determined to pass down his expertise to the younger generation. For now, he’s focussed on teaching his two sons, Mohd Eri Azri, 33, and Mohd Ahmad Adi Adli, 26, the craft.

“I’ve been teaching Mohd Eri and Mohd Ahmad to make It takes about two years for an apprentice to master the skill. Thankfully, my sons are interested in this dying art. And, they are fast learners,” said Md Ghani who lives in Wakaf Baru in Kota Bharu.

“There are about five batik chop makers in Kelantan now and I’m sharing my knowledge and skills with my sons so that they continue this legacy for future generations,” he said. “I am willing to teach anyone, as long as they want to learn, are patient and persistent to learn this craft.”

The father of five received the Adiguru Kraf Blok Batik (Block Batik mastercraftsman) award from Kraftangan Malaysia in 2011 which, he said, is one of the most significant milestones in his career.

Over the years, Md Ghani has trained over 50 students from Institute Kraftangan Negara on batik block making. He wants to see a revival in the craft and said that he will continue with the trade because he wants to make Malaysians appreciate the traditional craft that he loves. 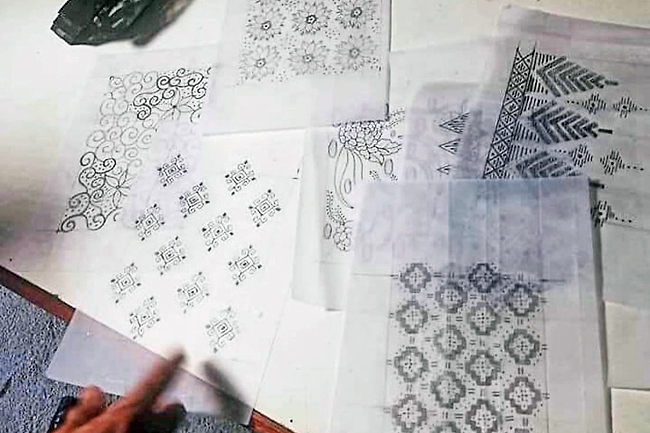 “These days, it’s hard to come across youth interested in learning to make batik blocks. It’s a tedious job, and the salary isn’t that attractive. A batik block apprentice can earn about MYR30 a day, and this doesn’t seem lucrative compared to the wages of a factory worker or a petrol pump attendant.

“Instead of working as a batik block maker in the village, most youth would rather move to the city to find higher-paying jobs or venture into online businesses,” said the soft-spoken man.

Batik is a centuries-old textile tradition and in Malaysia, the craft is practices mostly in the East Coast states of Pahang, Terengganu and Kelantan. Hand made batik is created by drawing designs on a fabric with hot liquid wax using a metal tool called canting.

Another type of batik is batik terap or batik tjap (pronounced chop), where a block with intricate designs is dipped into wax and then stamped onto fabric. The block – often made from strips of copper, zinc or tin – can weigh about a kilogramme.

Sometimes, different blocks are used to stamp patterns on one piece of cloth – the kepala kain (centre panel), kapit kain (boarder) and badan kain (the body of the batik material) often have different patterns.

Md Ghani has been a batik block maker for five decades.

He picked up the art of making batik blocks from a batik maker in Kelantan in the 1970s when he was 15 years old. Over the decades, he has further honed his skills by attending batik block making courses organised by Kraftangan Malaysia.

He has proudly crafted about 6,000 batik blocks in his career, so far. “I grew up in a small batik village in Pasir Mas. Back in the 1970s, jobs were scarce, so I turned to learning to make batik blocks to earn a living. What drew me to the art was the idea of creating intricate motifs and pretty designs on the batik blocks.

“It is a skill to be able to do this and I liked the idea of designing the moulds to make beautiful batik,” shared Md Ghani, who is the eldest of five siblings.

His three brothers are also involved in the batik business – two are batik makers, and one owns a batik retail business.

In the last 40 years, Md Ghani has been operating his own business – Al Amin Batik – from his home at Kampung Chenderong Batu, a hamlet that’s a 10-minute drive from the state capital. Mohd Eri, Mohd Ahmad, and two staff help him run his business.

Md Ghani receives designs for his custom-made batik blocks from batik makers from the east coast as well as East Malaysia and Thailand.

He first replicates the designs, often finely detailed and intricate. onto a sheet of paper. Then, copper sheets – measuring 1.5cm each – are cut into long strips. Next, a long nose plier is used to bend and shape the copper strips into various motifs – such as flowers, leaves and geometric patterns – of the designs.

Once complete, the shaped pieces of metal are soldered onto an open metal base with a handle.

It takes a highly skilled craftsman to create the intricate designs that go on the blocks. After all, the quality and beauty of a piece of batik is largely dependent on the quality of the batik blocks used. It is very important, Md Ghani said, to be precise in making the blocks.

Depending on the intricacy and complexity of the designs, it can take Md Ghani between three and seven days to complete a batik block. The starting price for a block is MYR350. On average, he makes about 10 batik blocks in a month.

Besides traditional patterns, Md Ghani has also started making copper blocks with more modern designs, such as those with khat writing and various logos. These are mainly used as decorative items.

According to Md Ghani, batik makers prefer blocks made from copper sheets to iron because they are more durable and non-corrosive. He too prefers to use copper sheets as they are flexible, making them easier to shape to produce delicate patterns.

“Copper is an excellent conductor of heat. It absorbs heat quickly and retains it for a long period of time. Using copper moulds is also more effective in batik stamping because the heat spreads evenly over the block after it is dipped into the hot wax used to stamp the design on the cloth. Plus, copper is durable, and easier to repair should the moulds get damaged,” said Md Ghani. Mohd Eri admits that learning to make batik blocks is challenging, especially shaping the copper strips into intricate motifs of some designs. He went for a two-year batik course at Institut Kraftangan Negara in Rawang before joining his father’s trade.

Though he is slowly mastering the skill, Mohd Eri said that he has “a long way to go” before meeting his father’s exacting standards. He has been part of the team at Al Amin for seven years. “The most challenging part is making the motifs and fitting them into the block. The motifs have to be identical to ensure the pattern is symmetrical. It requires creativity but also precision and skill to make these batik blocks,” he said.

But while it was initially difficult, he is happy that he is seeing progress in his own capabilities.

“I am getting better slowly,” said Mohd Eri, the eldest of five siblings. His sister – Zainatul Shafika, 31, is a housewife, while the younger two siblings – Ahmad Aisy Anaqi, 21, and Ezara Amalyn, 18, are still studying.

“Mohd Eri is 90 per cent skilled as a batik block maker, and I am confident he will be up to my standard in good time,” said Md Ghani. “Ahmad is also enthusiastic about picking up the skills. The key is that both my sons are interested in this traditional skill.

“Most of my children’s peers may not have the interest to learn batik crafting because to them it may seem old fashioned. But, thankfully, my sons are passionate and willing to learn,” he said. Mohd Eri sees the potential in this traditional craft and has started to promote the family’s handcrafted batik blocks on social media platforms like Facebook and Instagram. By promoting their products online, the father of two hopes to educate people on batik block crafting, batik and its rich heritage.

“Batik is part of the Malay heritage. Sadly, many of the younger generation aren’t interested in wearing batik because they think it isn’t trendy. By promoting our handmade creations, I hope more Malaysians will appreciate batik, and be proud to wear traditional batik clothing.”