THE WASHINGTON POST – Gather ’round, sisters, to read tales of female rebels and pioneers from earliest days to Stormy Daniels. Our leader (leadress? I think not), Rosalind Miles, a woke 78-year-old British novelist and historian, takes us through tranches of lessons about our forebears in a brisk, almost impatient way – she has a lot of material to get through and only so many pages in The Women’s History of the Modern World: How Radicals, Rebels, and Everywomen Revolutionized the Last 200 Years. The tranches have sparky titles – Turning the Wheel, One-Way Pendulum, Some Like It Cold and The Longest March – and they are organised chronologically, mostly, and by category.

We begin with quick histories of women you haven’t heard of, even if you have been paying attention and have read Simone de Beauvoir. On the first page we are introduced to the vivacious Olympe de Gouges, who was brought to the Paris guillotine in November 1793. A self-invented larger-than-life figure, she was a bold progressive and a public intellectual. De Gouges attended the salons of the day, where she argued for enhanced rights for women (she may have coined the term ‘citoyenne’; even in revolutionary France there was no such thing as a female citizen). She also wrote articles, pamphlets, books and plays. One play was about the evils of slavery and the slave trade. Mostly, she was an advocate for women’s rights. “Women, wake up… recognise your rights! Oh women, women, when will you cease to be blind?” she wrote in 1791. “What advantages have you gathered in the Revolution? A scorn more marked, a disdain more conspicuous… Whatever the barriers set up against you, it is in your power to overcome them; you only have to want it!” When she was jailed for her radical views, she refused to walk them back or apologise for her principles. A newspaper article in 1793 said, “She wanted to be a statesman; it would seem that the law has punished this plotter for having forgotten the virtues suitable for her own gender.”

Faster they accumulate, these women warriors Miles pulls out of obscurity. Have you heard of Patyegarang? Approximately the same vintage as de Gouges, this one-named Indigenous Australian girl of the Eora nation is credited with being the interpreter of her native tongue to English through a relationship with a lieutenant with Britain’s First Fleet. Don’t forget Barangaroo (who like Patyegarang and Cher went by a single name), another powerful woman at the time of colonisation, who was such a tough broad that a part of Sydney is named for her. How about the Grimké sisters – Sarah and Angelina, abolitionists who were outspoken South Carolinians and, remarkably, White. Back to England we go to meet the “wicked Lady Amberley”, so called because she believed in education for girls, and the rights of women to own property, vote and get equal pay for equal work. This was 1871, friends! .

Before the 19th Century, it was generally agreed upon that an education was a waste for a girl or a woman. She would be married off after learning the basics of homemaking – and perhaps how to play the pianoforte – and learning to please her boss, I mean husband. A fear that studying (ancient languages, among other fields) would cause a young woman to lose her femininity and her fertility “has bedeviled the education of girls since the Middle Ages”. 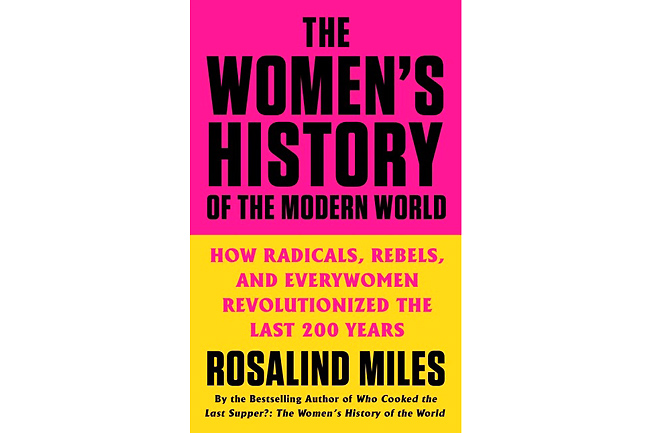 Thus the German-born astronomer Caroline Herschel, uneducated but working with her brother, discovered eight comets as well as other bodies in the skies, and was eventually paid GBP50 a year by King George III, making her the first woman in Britain to draw a salary for being a scientist. Mary Anning discovered her first prehistoric skeleton in Dorset when she was 12 years old. Mary Fairfax Somerville, who was deliberately kept out of the schoolroom by her practical parents, discovered Euclid in her family’s library and moved on from geometry to trigonometry and astronomy. She was brilliant and, though forbidden from studying, somehow knew there was something up in the heavens, which turned out to be Neptune, for whose discovery she received no credit. In addition to working as a scientist, Somerville found time to be married twice, have four children, teach and be a socially vibrant member of Edinburgh society, living to the age of 91.

When it comes to certain institutions, Miles doesn’t spare her ire. “Oxford and Cambridge, true to their monastic origins, clung to their proud and ancient traditions of fearing, despising, and excluding female students for as long as they could.” Eventually, Cambridge felt pressured to open a college for women, Girton College, in 1869, and Oxford resisted until 1878, when Lady Margaret Hall was founded. At last women could attend England’s storied universities – except they could not receive degrees.

Miles’s tone swings all this speed-herstory along, with a giant helping of feminist theory. On the book goes, finding daring women of all kinds. She introduces us to explorers, pilots, warriors, spies, writers, queens, traitors, courtesans, athletes and politicians we’ve not heard of before. And some we have.

Alongside their brief biographies are frequent asides about the lack of recognition these ladies endured, or something about how if men had to menstruate it would become a sacred act.

In other words, Miles is pissed off. Here she is talking about prewar Vietnam: “The social structure… had evolved from the writings of the great sage Confucius, who mansplained in all his teachings that women owed total obedience to every man in their lives, from the local lord to their youngest son.” Here she is in an American laboratory: “When those heroic gender warriors, the Cambridge scientists James Watson and Francis Crick, used the crucial work of Rosalind Franklin in the discovery of DNA in 1953, she got the el-bow and they got the Nobel.” (The late Franklin wasn’t eligible for the prize, awarded several years later, but history could have at least given her more credit.)

Woven throughout The Women’s History of the Modern World are little pauses – almost like cul de sacs – in which Miles (who is married and has grown children) hints that conventional women’s lives centred on a husband and family are not always the most satisfying or enriching.

She quotes Vita Sackville-West in 1931: “Your children, your husband, your splendour, were nothing but obstacles that kept you from yourself. They were what you chose to substitute for your real vocation… The woman protests, ‘But you mustn’t blame my husband.’ ‘I don’t,’ her accuser replies… ‘He merely killed you, that’s all. Men do kill women. Most women enjoy being killed; so I am told.’ “

Just like all the trailblazers in this book, we 21st Century women have been oppressed for so long that we don’t even recognise it. Women have been yearning for equality since time itself, and it shakes me that the terms and the stakes (notwithstanding our right to vote) have remained the same through the centuries. We may be feminists, but we still drive our children to the orthodontist after school (in the before times, when this was written). (Sorry, that slipped.) So we should not just read this book, we should take it to heart.

Miles skips many damning stories of women who were the true stars behind their men, but then that could fill volumes.

As she reaches modern times, the catalogue becomes less compelling. (I was surprised, though, by the glaring absence of Golda Meir in the accounts of first female presidents and prime ministers.) I did not know that actress Grace Kelly’s father was required to pay Prince Rainier USD2 million for her hand in marriage. Call it a dowry or don’t; think twice before you marry.