THE WASHINGTON POST – At the end of July, a Jack in the Box in Chula Vista, California, got a new employee. He stood there for a couple of weeks while other workers swirled around him, jockeying between flat top and fryer, filling up paper sleeves with the tacos that the fast-food brand sells every year by the hundred million.

And then, having learned the ropes, he began to work, focussing exclusively on the fry station, dropping baskets of seasoned curly fries and stuffed jalapeños into vats of oil, eagle-eyeing when they were perfectly golden. He doesn’t take breaks, never shirks when the boss isn’t looking, won’t call out sick or lean heavy on the company health insurance.

But that doesn’t mean he comes cheap. Flippy the Robot cost USD50 million to develop, and cost Jack in the Box about USD5,000 for installation and USD3,500 per month for rental.

Restaurants have toyed with robotics for years, cropping up as early as 1983 when Two Panda Deli in Pasadena, California, used robots to schlep Chinese food from the kitchen to customers. There have been sushi-rolling robots and coffee-brewing robots and tiny drone “iTray” waiters: Often they are consumer-facing, a form of customer entertainment and “value added” to set a brand apart.

But now – with restaurants facing a protracted labour shortage and robotic technology becoming both better and cheaper – restaurant brands are doing new math. How long before an initial technology investment pays off? How long will it take to train human employees to work alongside robot co-workers? And, ultimately, how many restaurant jobs will be permanently commandeered by robots? 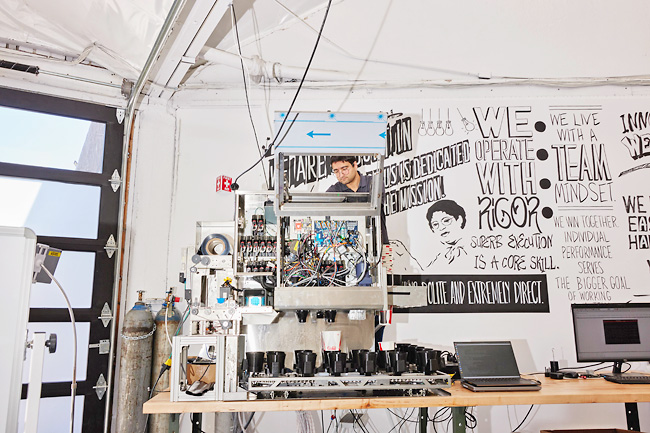 The way Miso Robotics chief executive Mike Bell tells it, Flippy was initially a solution in search of a problem. The company has been around six years, five entirely in research and development, trying to bring a product to market. The robotics lab’s sprawling warehouse in Pasadena is packed with whizzing robot pieces and 3D printers hustling to keep up with the demands of 120 engineers and programmers. Their initial question: In a nation that consumes nearly 50 billion burgers each year, why not develop a robot that can flip them with precision at every fast-food restaurant?

They took the idea to White Castle. The burger brand’s executives said the idea sounded nice, but they had a more pressing need: Got anything for the fryer?

The fryer station is hot and it’s dangerous. It’s frequently where workplace accidents occur. It’s also where the drive-through gets jammed up at night with people waiting on their loaded fries and chicken rings.

So Miso let Flippy keep his jaunty name but re-engineered him to start dipping fries. White Castle bought in, installing Flippy in a Merrillville, Indiana, location and then several others around the country, with the aim of having 100 over the next few years. Jack in the Box execs zipped up to Pasadena for a demo.

Miso Robotics kept going, developing a coffee forecaster-maker-pourer for Panera. It began work on Sippy, a drink fulfillment robot that pours, seals and labels beverage orders – which will also be employed later this year at Jack in the Box – as well as Chippy, which will soon be frying and seasoning fresh tortilla chips at Chipotle. The robots, with their articulated arms, multiple cameras and machine learning, excel at those mind-numbing tasks restaurant workers have to repeat again and again. And they aren’t sniffy about working the graveyard shift.

“We realised for a robotic solution to be a real solution for our customers, it had to have a really high customer return on investment. Which meant it had to take a meaningful amount of labor off the table,” Bell said. For now, they’ve shelved guacamole robots and ice-cream-scooping robots. They are trying to stay focussed.

Jack in the Box’s mascot, Jack, is kind of a proto-robot, modelled on a historic toy from the 1500s, a mechanical clown that would pop out of a box when you cranked a handle.

They’ve ditched the clown in marketing efforts in recent years, part of the company’s long-standing strategy of throwing things out there to see what sticks. The company was early to the two-way intercom system now ubiquitous in fast food; it introduced breakfast sandwiches and portable salads. And its menu has a more-is-more exuberance that Oscar Wilde would approve of: These days it has upward of 80 menu items, about 60 per cent of which end up in the fryer.

Flippy has his work cut out for him. But there won’t be the legions of robots from the movie I, Robot any time soon. “Fry, Robot” will be slower: Of the 2,270 Jack in the Boxes, 93 per cent of which are franchises, it’s just this one Chula Vista store where Flippy is being employed to work out the kinks, with Sippy following at the end of this year. The goal is to have Flippy installed in another five to 10 high-volume Jack in the Box locations in 2023. If robots are cheaper and more efficient, experts wonder, will the more than three million entry-level fast-food jobs be ceded to robots entirely in the future? For now, the thorny problem is there just aren’t enough humans who want to do the work.

According to the National Restaurant Association, 65 per cent of restaurant owners still say finding enough workers is a central problem. In the Great Resignation, prospective hospitality workers were being lured back with the promise of fancy fitness club memberships and 401(k) plans. It’s an industry that has faced a stark reckoning, even before the pandemic, about pay, worker safety and career advancement.

For the country’s almost 200,000 fast-food restaurants, the customers are there but the workers are not. Owners have cut the hours they’re open, closed dine-in options, streamlined menus to accommodate the changes.