ANTWERP, BELGIUM (AFP) – Out for an afternoon hike, Veerle Bonaers and a friend stop pushing their baby and look down to their map, suddenly aware they have taken a wrong turn.

Claire, an acronym for Clean Air for Everyone, is silent because she is a doll and wedged beside her are three electric sensors that measure the particulate matter that spews out of factories and car exhausts.

Her minders, though dressed for a trek, will walk 7.5 kilometres – about 10,000 steps – from the Antwerp University campus through Belgium’s notorious traffic, which makes this small European Union (EU) country of 11 million one of the most harmful polluters in Europe.

Referred to as the “silent killer”, air pollution is responsible for about seven million premature deaths worldwide each year, according to the United Nations (UN). 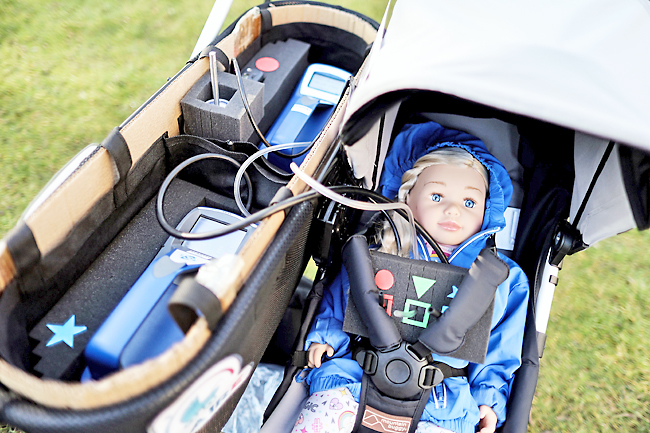 In Europe, every year tens of thousands of city dwellers die prematurely, a study in The Lancet Planetary Health showed.

Among European cities, Antwerp was the second deadliest after Madrid when it came to exposure to nitrogen dioxide, the poisonous gas emitted by diesel autos.

It is also the gas made infamous in the Dieselgate scandal that exposed mass cheating by Volkswagen, the German auto giant that used a secret device in millions of cars to brazenly circumvent EU pollution norms.

“I have a child myself and I’m very concerned about the effect of air pollution,” Bonaers said as her friend Mariska Hendrickx redirected their stroll, traffic cruising by on the busy Prins Boudewijnlaan.

Claire is the brainchild of Professor Roeland Samson whose research ropes in Antwerp citizens to help his team more widely measure exposure to air pollution.

“We have hundreds of parents and grandparents willing to go on a walk with Claire,” the professor told AFP as he gave the day’s walkers their instructions.

“This is very important because air quality varies a lot. If we just do one measurement in time we wouldn’t have a complete picture,” he added.

When Claire is in her buggy, traffic-related pollution such as soot and particulate matter is logged every 10 seconds. Other parameters, such as wind speed and time of day, are also recorded.

The plan is for Claire to go out daily until November, and volunteers are able to sign up on the university website dedicated to the project.

Antwerp is the biggest city in Flanders, Belgium’s densely populated – and flat – Dutch-speaking region, with a notorious ring road, one of the most traffic-clogged arteries of Europe.

Cars here share the road with a never-ending flow of container trucks that roar to the city’s massive port, the second largest in Europe, or to the biggest, in Rotterdam, that is just an hour away.

Flanders is largely urban sprawl and most Belgians dream of a stand-alone house in suburbia, encouraging ever more construction.

They also benefit from one of the world’s most generous company car schemes, in which firms are incentivised to give their employees a car and free gas instead of a raise.

This scheme, criticised by the EU and Organisation for Economic Cooperation and Development (OECD), puts hundreds of thousands of cars on Belgium’s congested roads, most often gas-guzzling late models, though car companies have started to clean up their act because of the climate crisis.

Joeri Thijs of Greenpeace Belgium said the scheme “has pushed a lot of employees into a car even when they don’t need it for their jobs”.

Scrapping it, he said, “takes political courage obviously because it is taking away a benefit that a lot of people get and have gotten used to”.

The current Belgian government has initiated a plan to fully electrify the company car scheme away from fossil fuels, which Thijs hoped would get the Belgian commuter to rethink their mobility and turn to bikes, public transport or even just walking.

“Most people realise, even those sitting in the traffic jams, that we need to go for another kind of mobility,” he said.

This new awareness is pushing people to sign up to spend an afternoon with Claire.

In Antwerp, where a conservative mayor has only recently made pollution a priority, several citizen-led initiatives have emerged.

In 2016, for example, 2,000 residents installed low-cost captors to better measure the dirty air.

“If people help build the data, they also better understand what is going on and they make the data their own,” said Professor Samson.

“It helps them to… spread the word to the world.”