MEXICO CITY (AP) – Tens of thousands of people packed the Mexican capital’s main boulevard on Sunday to protest President Andrés Manuel López Obrador’s proposal to overhaul the country’s electoral authority in the largest demonstration against one of the president’s efforts during his nearly four years in office.

The massive turnout was a strong rebuke of the president’s assertion that criticism comes only from a relatively small, elite opposition.

Opposition parties and civil society organisations had called on Mexicans to demonstrate in the capital and other cities against proposed electoral reforms that would remake the National Electoral Institute, one of the country’s most prized and trusted institutions.

López Obrador sees the institute as beholden to the elite, but critics say his reforms would threaten its independence and make it more political. The initiative includes eliminating state-level electoral offices, cutting public financing of political parties and allowing the public to elect members of the electoral authority rather than the lower chamber of Congress.

It would also reduce the number of legislators in the lower chamber of Congress from 500 to 300 and senators from 128 to 96 by eliminating at-large lawmakers. Those are not directly elected by voters, but appear on party lists and get seats based on their party’s proportion of the vote.

The proposal is expected to be discussed in Mexico’s Congress in coming weeks, where the president’s Morena party and allies hold an advantage.

“I’m already fed up with Andrés Manuel, with so many lies, so much crime,” said 45-year-old manager Alejandra Galán, as she raised a Mexican flag in the middle of the multitude. 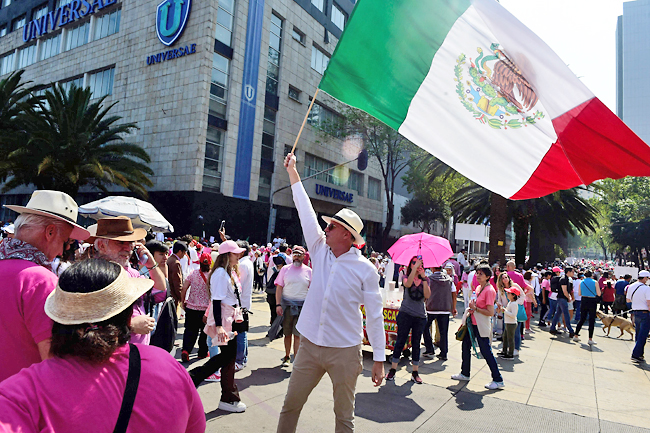