THE WASHINGTON POST – Public schools that kept universal masking requirements in place last year had significantly fewer cases of COVID-19 than their counterparts that lifted mandates as state policies changed, according to a study published in the New England Journal of Medicine that weighs in on the hotly debated pandemic safety measure.

The study, which followed schools in the Boston region during the 2021-22 academic year, found that the end of mask requirements was associated with an additional 45 cases of COVID-19 per 1,000 students and staff – or nearly 12,000 cases during a 15-week period from March to June.

School systems in Boston and Chelsea, Massachusetts, had stayed with universal masking even after Massachusetts officials rescinded the statewide requirement in February. But 70 nearby school districts did away with masking mandates.

Before that split, COVID trends were similar across the school districts. Afterward, they diverged, with a “substantially higher incidence in observed in school districts that lifted masking requirements”, according to the research.

“Our results support universal masking as an important strategy for reducing COVID -19 incidence in schools and loss of in-person school days,” wrote the authors, who included researchers from Harvard University, Boston University and the Boston Public Health Commission. 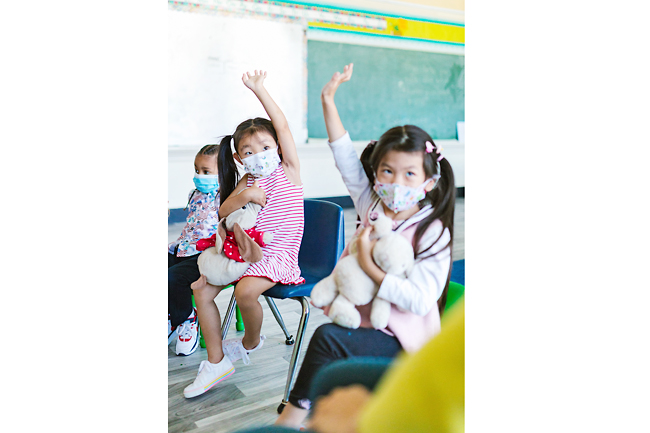 Universal masking helped most when the levels of virus were highest, suggesting that the safety measure is most useful just before or throughout periods of high transmission.

Massachusetts was one of 18 states with a masking requirement in place for public schools in 2021-22. It withdrew the policy when guidance changed from the Centers for Disease Control and Prevention.

Epidemiologist and infectious-disease transmission modeller at University of Maryland School of Medicine Meagan Fitzpatrick called the study well-designed and well-executed, saying she wished there had been one like it earlier in the pandemic.

“The difference in COVID risk between districts with and without masking is striking,” she wrote in an e-mail. If anything, she said, the study underestimates how well masks control disease, since even in schools with no mandate, some students and staff probably continued to wear masks. The findings support on-ramps and off-ramps for mask mandates, she said, which “makes sense, since masking does the most good when there is disease to be prevented”.

The school districts that continued with masking mandates had larger percentages of students of colour, students from low-income backgrounds, students with disabilities and English learners, the study said.

They also tended to have older buildings, with outdated or missing ventilation and filtration systems and larger class sizes.

It also pointed out that Boston and Chelsea were among the state’s communities hardest hit by COVID, and that COVID policy decisions should recognise historical and present-day inequities by race and income.

Senior vice president at KFF Jennifer Kates, a non-profit focussed on health issues, who has been helping to lead its covid work, said the study demonstrated a “sizeable” effect of universal masking – a finding that could be useful to efforts to control a future coronavirus variant or other infectious disease. “This is a very low-cost, highly effective intervention,” she said.

Fitzpatrick said that the finding is important to the current crisis in child health, given that many hospitals are overwhelmed by children with respiratory infections including RSV, influenza and COVID.

“Masking is one of the rare tools that can combat all of these,” she said.