The event began with the recitation of Surah Al-Fatihah and Doa Selamat read by Acting Head of Kampong Sibut Religious Hall Khairol Rizan bin Ibrahim, followed by the cutting of Korban meat which was done by MoRA’s workforce, the religious hall committee members, youth volunteers and Mukim Amo residents.

The minister also distributed the meat to six families of Muslim converts living near the religious hall.

The activity was intended to allow MoRA to get acquainted with new converts in the district in jointly glorifying Hari Raya Aidiladha.

It was also held to realise the resolution of Youth Leadership Convention in giving opportunities for youth involvement in activities run by the ministry. This year’s Korban rite was coordinated by the Building and Maintenance Division, Policy, Planning and Research Division, International and MABIMS Division as well as Public Relations Division at the ministry. 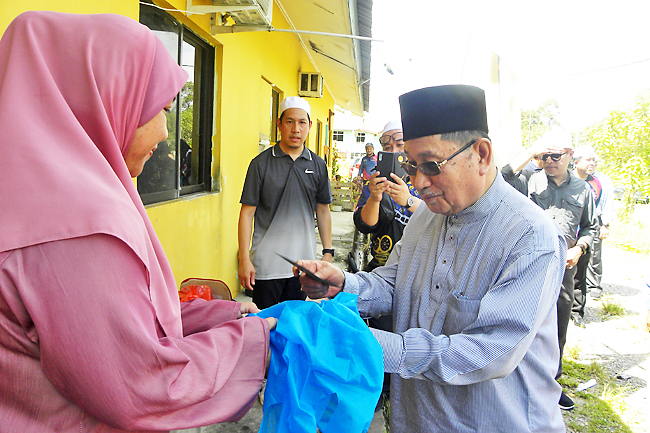 Over 100 people received Korban meat from the Ministry of Primary Resources and Tourism (MPRT) during a ceremony to mark Hari Raya Aidiladha at the ministry’s Setia Pahlawan Hall yesterday.

A total of 330 individuals received Korban meat distributed by the Ministry of Culture, Youth and Sports (MCYS) yesterday.

The same event was held in tandem at Jawatan Dalam Hall of Brunei History Centre, where 217 orphans and staff of the centre and Language and Literature Bureau received the Korban meat.

The meat were handed out by Permanent Secretary (Administration, Finance and Estate) at the MCYS Pengiran Mohd Amirrizal bin Pengiran Haji Mahmud and Director of Research, Development and International Affairs at the MCYS Hajah Fauziah binti Haji Abdul Hamid.

The recipients comprised orphans and staff from the Youth and Sports Department (JBS) and Museums Department.

This year, 10 cattle were sacrificed, and MCYS officers and staff along with Meraih Berkah Group participated in the sacrificial ritual.