Marine conservation to the fore

Brunei Darussalam is blessed with vast biodiversity based on previous record on marine biodiversity assessment done in 2014. It discovered that the country has rich coral fauna with 410 reef building coral species. The coral communities are most notable in respect of the very unusual co-occurrence of high distinctive suite of reef building (hard) coral, soft coral and gorgonian sea fans.

Unfortunately, similar to other parts of the world, Brunei’s coral reefs are at risk of endangered by human activities including overharvesting, habitat degradation due to pollution and climate change. Capture fisheries are in the frontline to be impacted by any alteration of the marine ecosystem.

This was shared by Head of Fisheries Ecosystem Management Department of Fisheries, Ministry of Primary Resources and Tourism (MPRT) Hajah Zuliza binti Haji Jolkifli in her presentation on ‘Artificial Reefs (ARs) for Fisheries Production Enhancement’ during the Decommissioning and Restoration Forum held in conjunction with the Brunei Mid-Year Conference and Exhibition (MYCE) at the Musyawarah Hall, International Convention Centre (ICC) in Berakas yesterday.

Realising the importance of coral reef, she said, “The Department of Fisheries implemented management of fisheries resources under the Fisheries Order 2009 which include zoning of fishing grounds divided into four zones – Zone 1 at zero to three nautical miles, Zone 2 at three to 20 nautical miles, Zone 3 at 20 to 45 nautical miles and Zone 4 at 45 Nautical miles onwards. The purpose is to limit fishing rights to certain fishers in designated areas depending on the types and fishing capabilities of each fishing gear.

“Other intervention measures that have been implemented, such as moratorium for commercial bottom trawlers, new mesh size regulation for trawl cod-end, moratorium for small scale fishing activities, banning of catches, landings and importation of sharks, established marine protected areas and Brunei government participated as the pilot country in ASEAN Catch Documentation Scheme.”

On tools for management and enhancement of marine fishery resources, Hajah Zuliza said, “Artificial reef is a submerged structure deliberately constructed or placed on the seabed to emulate some functions of a natural reef such as protecting, regenerating, concentrating or enhancing population of living marine resources.” 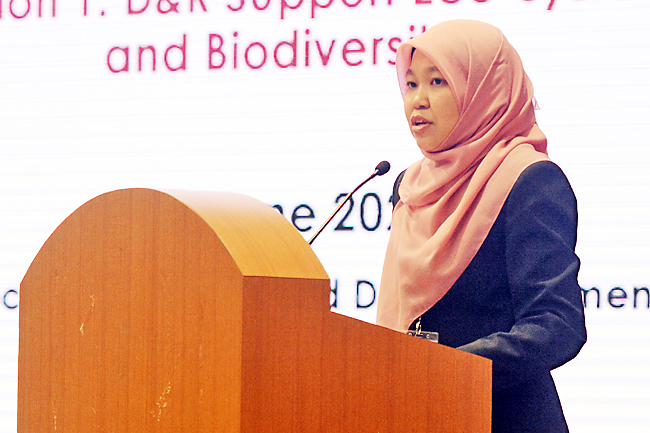 The objectives of having artificial reefs include, “creation of new habitat for fish to enhance the quality of fishing grounds offering alternative fishing sites to redirect fishing pressure, creating potential network of marine protected areas to manage the life cycle of fish and connectivity, promote the survival of commercial targeted species like red snappers, mackerel and emperor red snapper, serve as silent enforcement to minimise from foreign encroachment and local encroachment in prohibited areas”, she said.

Last year, she revealed, “the Fisheries Department conducted a study on potential of deployment sites to identify proper site to support the growth of marine life by taking into consideration of Socio economic and environmental parameters. We found that Chearnleyrock, Nankivell, Victoria patch and Amcotts rock are most preferred deployment sites”.

For the Rig to Reef (R2R) programme, she highlighted, “In 1988, the Department of Fisheries and BSP cooperated in the building of rig reefs, two redundant offshore oil rig platforms were placed on the seabed of two Fathom rocks. In 1994, a second rigreef was built in the same area and in 2010, an additional deployment of artificial rig was constructed at Ampa patches.”

The R2R, she pointed out, is a win-win approach for the environment and the economy to safeguard profitable venture for commercial fishing and ecosystem.

She shared that the outcome of R2R programme showed that in commercial fishing, groupers, jack, snappers, rabbitfish and barracudas are among the most commonly caught species and that in eco-tourism, divers and underwater photographers are also attracted to the colourful coral and organisms attached to the rig reefs.

She iterated the importance of continued cooperation between regulators, government agencies, operators and contractors as well as research and development on the best solution for engineering, preparation, removal, disposal and repurposing and restoration in safeguarding the environment and safe implementation.