Marcos gets rockstar welcome in Singapore

ANN/THE STRAITS TIMES – Philippine President Ferdinand Marcos Jr was mobbed by his Filipino supporters on the first day of his two-day state visit to Singapore yesterday.

The Office of the President estimated close to 2,000 Filipinos were at the University Cultural Centre Ho Bee Auditorium at the National University of Singapore for a chance to see Marcos in the flesh.

He is in Singapore after a state visit to Indonesia.

The crowd cheered as Marcos entered the hall, the people scrambling to touch his hands and to take selfies with him.

One woman even shed tears when Marcos finally took the stage.

“I can’t explain how I’m feeling. I wanted to cry since this morning,” Maribel Eades told reporters.

Marcos said he owes much to his supporters in Singapore, where he won the Filipino migrant workers’ vote in the May presidential elections.

He received over 31 million votes overall, making Marcos the first Filipino president to win by a majority vote since his dictator father, the late Ferdinand Marcos Sr, was deposed in 1986.

“You gave me more than 31 million votes. That’s why I owe much to you all. In exchange, I promise to work on giving you jobs and improving the Philippines,” he said. 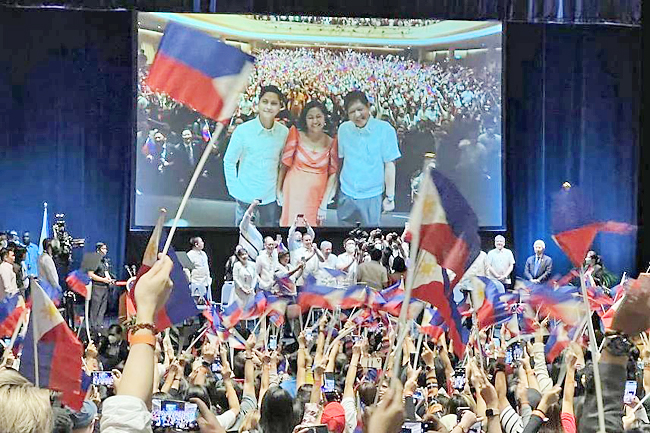