Heading into Saturday’s (Sunday, 12am Brunei time) curtain raiser to the Premier League season, the pressure is on Haaland and Nunez to provide evidence they can justify their hefty price tags over the coming months.

The pair represent over GBP100 million of goalscoring firepower as the rivalry between City and Liverpool intensifies. Much has changed at City and Liverpool since Pep Guardiola’s side pipped the Reds to the title by one point after a thrilling come-from-behind victory over Aston Villa on the last day of the season.

City’s fourth title in five seasons was just reward for their incredible consistency, but Guardiola’s perfectionist personality ensured he would not rest on his laurels.

Guardiola sanctioned the sales of Gabriel Jesus and Oleksandr Zinchenko to Arsenal, while Raheem Sterling joined Chelsea and Fernandinho returned to Athletico Paranaense.

Aware that City’s success last season was achieved despite their lack of a natural central striker, Guardiola made a blockbuster move for one of Europe’s brightest young stars as he landed Norway international Haaland from Borussia Dortmund for GBP51 million.

Having failed to prise Harry Kane from Tottenham’s clutches 12 months ago, Guardiola hopes Haaland can emulate his prolific form at Dortmund in the more demanding Premier League.

The 22-year-old’s ability to mesh with City’s array of creative talents is one of the key storylines that will define the title race. The early signs are promising as Haaland took just 12 minutes to score on his City debut in a friendly against Bayern Munich. 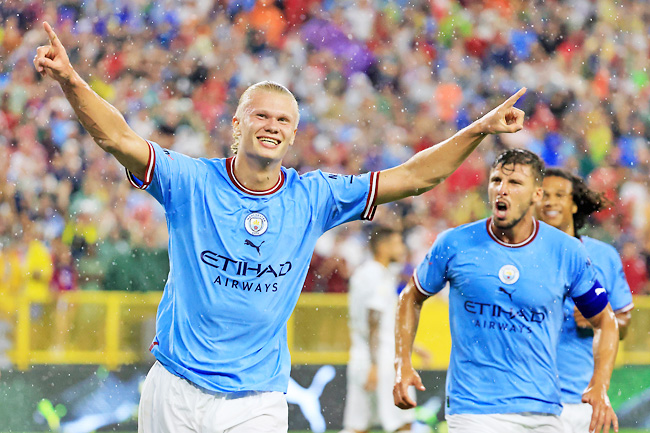