The updated management procedures for handling deceased bodies due to or accompanied by COVID-19 were announced by Minister of Health Dato Seri Setia Dr Haji Mohd Isham bin Haji Jaafar during a press conference yesterday.

The minister said the management procedures have been reverted to those prior to the pandemic.

Among the procedures are: deceased bodies no longer need to be managed at the National Isolation Centre as they can be handled at a mosque or at home in accordance to the family’s wishes with the guidelines such as wearing face masks, gloves, aprons and eye protection when handling the body.

Dato Seri Setia Dr Haji Mohd Isham, however, said the body cannot be brought or handled at a home that has an active positive COVID-19 case.

“The body can be buried in any suitable cemetery according to the family’s wishes and screening for the virus with an antigen rapid test (ART) kit is not required for deaths at home.” 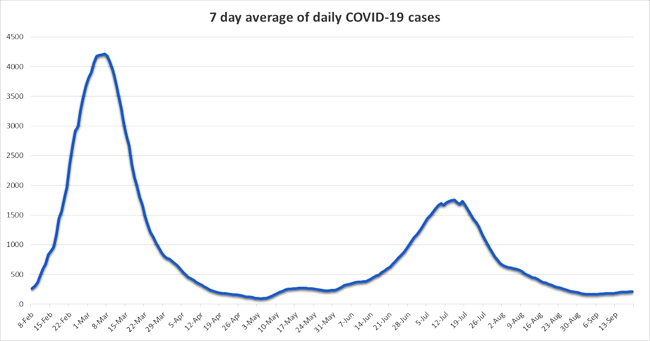 The minister also announced that the operating hours for the Swab Centre at the Raja Isteri Pengiran Anak Saleha (RIPAS) Hospital and SARI Centre in Suri Seri Begawan Hospital, Kuala Belait have changed to 8am to 5pm during the work week and closed on Fridays, Sundays and public holidays.

Meanwhile, the Sultanate recorded an average daily rate of 215 COVID-19 cases in the last week, an increase from the daily rate of 179 cases per day in the previous week.

A total of 46,728 ART results were uploaded to the BruHealth app in the last week, of which 3.2 per cent were positive. Despite the slight increase in cases, the minister assured that the infection trend shows that transmission remains low.

He also revealed that 215 new cases were reported, of which 209 were the result of ART and six were the results from 480 RT-PCR laboratory tests performed in the past 24 hours.

Meanwhile, there is no case in Category 5 requiring treatment at the intensive care unit, while three cases are in Category 4 requiring respiratory assistance and under close monitoring.

As of September 18, the rate of those with three dose of the vaccine stood at 78.3 per cent, while 10.3 per cent have received the fourth shot.