DPMM FC continued their winning streak in Group ‘B’ of the Brunei Under-15 Youth League after a 10-0 victory against Indera SC at the Jerudong Park Mini Stadium yesterday.

The match had barely started when Yang Teramat Mulia Pengiran Muda ‘Abdul Muntaqim tapped in the opening goal after collecting a rebound.

Yang Teramat Mulia Pengiran Muda ‘Abdul Muntaqim scored a brilliant free-kick to make it 3-0 before completing his hat-trick after netting home from close range in the subsequent attack.

It was all too easy for DPMM FC as Safwan nodded home an inch-perfect delivery from set-piece specialist Awangku Syafiq Hilmi.

Safwan bagged his hat-trick as he coolly slotted the ball home having been given space to run into the box.

Indera SC had their best chance in the first half when the DPMM FC goalkeeper misplaced his pass but Md Faizul Ikhwan’s shot narrowly cleared the bar.

The Indera defence were left exposed yet again as Md Akram slid home the seventh goal of the game after being afforded too much space.

The Jerudong-based outfit piled more misery onto Indera SC with two more goals in the second half . 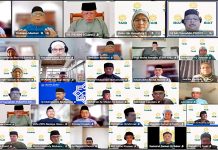 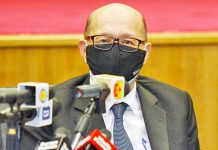