SINGAPORE (CNA) – A man went on trial for causing the death of an off-duty police officer who was crossing the road with the lights in her favour at a junction in Shenton Way three years ago.

Andrew Charles Vasko, 54, is accused of causing the death of Madam Salinah Mohamed, 40, on the night of February 10, 2019 by driving his Aston Martin into her.

He faces one charge of causing death by a negligent act not amounting to culpable homicide by failing to keep a proper lookout when making a right turn with his vehicle.

Salinah suffered fractures to her skull and was declared brain dead on February 14, 2019.

Her cause of death was a head injury sustained during the traffic accident.

The American, who is also a Singapore permanent resident, was represented by lawyer Remy Choo Zheng Xi. Vasko accepted an agreed statement of facts prepared by the prosecution. According to the court documents, Vasko had consumed alcohol at about 7pm that night at Sentosa. His last drink was at about 7.45pm. 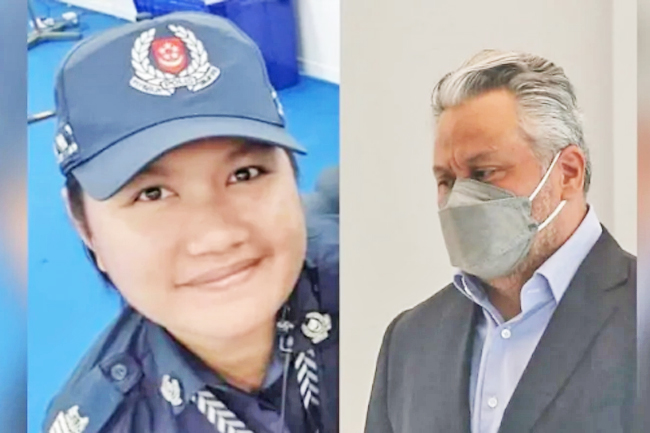 At about 9.25pm on February 10, 2019, Vasko drove his vehicle on the extreme right lane of Maxwell Road towards Straits Boulevard.

At the signalised junction of Shenton Way, he came to a halt at the stop line on the extreme right turning lane on Maxwell Road, conforming to the red traffic light signal.

When the traffic light signal for Vasko turned green in his favour, he moved his vehicle to the middle of the junction and waited to make a discretionary right turn.

While he was turning right, the front left portion of his Aston Martin collided into Salinah, who was at the mid-point of crossing from Vasko’s left to right view. The light signal for pedestrians was a blinking green man in her favour. The collision flung Salinah onto the road and she sustained a severe head injury. She was unconscious when taken to hospital and warded.

She died four days later on Valentine’s Day after being declared brain-dead.

Minister for Law and Home Affairs K Shanmugam had paid tribute to Salinah after her death, calling her a “dedicated officer” with 21 years in service.

She left her husband and three young children, he said.

Vasko was driving within the speed limit at the time, court documents showed. He also passed a breathalyser test conducted on him.

No witnesses were called yesterday, with the court adjourning the case to November.