With the global lockdown and restrictions slowly being lifted, most countries are seeing an influx of tourists.

One Brazilian recently made a stopover in the Sultanate as part of his journey around the world.

Robson Jesus introduced himself in an interview with the Bulletin as a 33-year-old who lives in São Paulo. He is currently on a mission to visit every country around the globe following the lifting of the travel worldwide. He recalled that back in 2018, he travelled to the United States to study English for a year but soon realised that his passion still rests in exploring new places.

“I was already feeling restless even before the COVID-19 pandemic started. I noticed that I was becoming more into travelling. I started by researching locations and prices, but my biggest surprise was yet to come,” he said. Robson said at one point, he found himself thinking about the people who have visited every country, which is estimated to be at 150.

“I was amazed, but to reinforce this feeling, even more, I discovered that none of these travellers was Black!” From this, a chain of questions began to emerge in his mind, such as why the number of people who have travelled around the world is so low and the characteristics that link them all. Robson said he became determined to be the first Black man to visit every country in the world as well as to empower the Black community in Brazil.

“For my goal to work, I would need to document my excursion. It was at that moment that I knew I needed to broadcast and share the trip through my Instagram and my YouTube channel, to demonstrate that a Black man from a poor family can make history.” 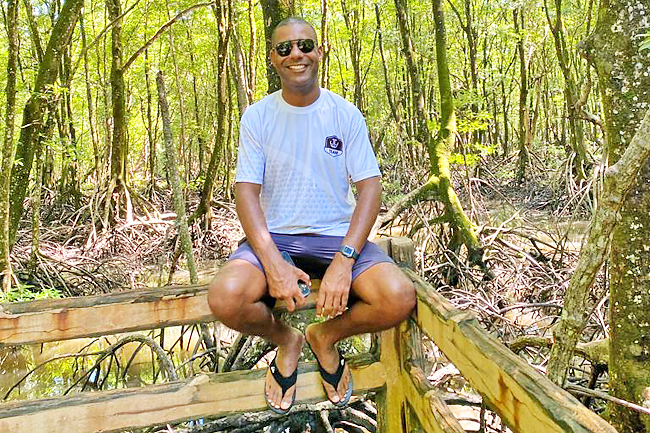 He thought of the challenge that would come with travelling the world as a person who struggles with public speaking. However, he also knew his mission would serve to encourage shy people like himself, to take on tasks that may seem impossible to complete.

His main motivation is to show people his experience in each country. “So, creating a connection that extends to everything and everyone is a project that resonates with the history of humanity,” he said.

Brunei was the sixth country on his list. As his first visit to the Sultanate, Jesus was delighted with his time here, especially at Eco Ponies, where he had a wonderful time with a local family.

“We had dinner together and I bid farewell to a person who was leaving to study in Japan. It was an unforgettable experience, a moment of prayer and fraternity.”

He was also grateful for the support and attention that the Poni Divers team had given him, which he said was instrumental in his immersion in what Brunei has to offer.

He has a positive outlook on the future as the easing of pandemic restrictions means that travelling is getting easier.

He believes people will once again explore the world.

“In my opinion, now is a great time to travel, as countries are opening up and there are not many tourists in places of interest yet; and with the fall of the US dollar travelling is more affordable,” he said.

Asked what his next plan is, Jesus said the next six months will involve finishing the Asia leg, before proceeding to Oceania, Africa and Europe and ending his mission in the Americas.