PARIS (AP) – Doctors amputated the testicle of a young man who got clubbed in the groin by a police officer during a huge Paris demonstration and who plans to file a lawsuit, daily French newspaper Liberation quoted him as saying in an article published on Sunday.

The incident occurred during a spurt of violence at a mostly peaceful march on Thursday by tens of thousands of people opposed to a hotly contested government pension reform plan. About one million people marched in cities around France that day.

The 26-year-old, identified in the French press as an engineer, said he was knocked to the ground, allegedly by an officer, while taking photos during a confrontation between some demonstrators and police. Another officer charged at him and quickly planted his club in the man’s groin.

Video of the incident circulated on social media and French television over the weekend.

Paris Police Chief Laurent Nunez ordered an inquiry into the exact circumstances of the incident as outrage grew over what appeared to be a new case of alleged gratuitous violence by French police, a longstanding complaint. 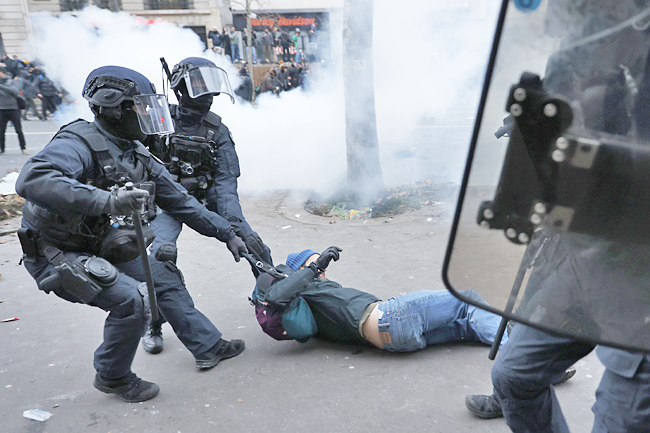 Liberation identified the injured man as Ivan S and said he told the newspaper he was suing “so that this stops, because I’m not the first person to be subjected to violence by police”. Lucie Simon, a lawyer representing him, said a lawsuit for “voluntary violence by a person in authority leading to mutilation” already was in progress, French media quoted her as saying.

French government spokesman Olivier Veran said in an interview on Sunday on French all-news station BFM TV that he was neither part of the police or judicial establishments, but “my thoughts are obviously with this person”.

French law enforcement agencies have long been peppered with excessive use of force complaints. Police unions contend their members often are the victims of violence committed by some people they are meant to protect.