KUALA LUMPUR (CNA) – Malaysia must be careful when using the term “herd immunity” as COVID-19 is likely to stay even after a large portion of the population is vaccinated, National Coordinating Minister for Immunisation Khairy Jamaluddin (BERNAMA pic below) said on Wednesday.

Khairy, who was speaking at an online forum organised by the Oxford & Cambridge Alumni Network Malaysia, said vaccination is not a guaranteed solution to the pandemic, but merely “one tool in an arsenal of measures” Malaysia has to combat COVID-19.

“I’ve stopped using that term. Some of the other leaders are still using the term ‘herd immunity’. I have advised the prime minister to be careful when using the term herd immunity, simply because it is my view as the coordinating minister looking at the data and the science that this may very well be endemic,” Khairy, who is also Minister of Science, Technology and Innovation, said.

“We may see COVID in a less threatening form but it will stay with us for quite some time,” he added.

Earlier this month, Health Minister Adham Baba said Malaysia has ordered enough vaccines to cover 109 per cent of its population who qualify for inoculation, with the aim of achieving herd immunity against COVID-19 by December. 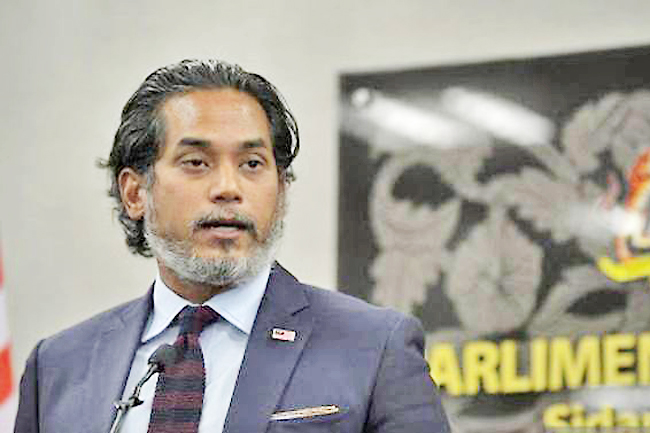 Based on latest statistics published by Malaysia’s Special Committee on Covid-19 Vaccine Supply (JKJAV), around 14.6 million people have registered for the national COVID-19 immunisation programme. Out of this, over 3.8 million have been fully vaccinated. This is still some way off Malaysia’s target of achieving herd immunity by inoculating 80 per cent of its population, or 26.7 million out of the total 33 million people in the country.

Prime Minister Muhyiddin Yassin was quoted by Malaysian media last Sunday as saying that the federal territories of Kuala Lumpur and Putrajaya would likely reach herd immunity by August with the opening of more vaccination centres.

Khairy reiterated the vaccination targets in Wednesday’s online forum, stating how the vaccination exercise would be completed for the population in Selangor, Kuala Lumpur, Putrajaya and Sarawak by the end of August.

Meanwhile, the vaccination exercises for key economic states Penang and Johor would likely be done in October, while the rest of Malaysia would be completed by December.

He maintained that while it was crucial for Malaysia to focus on vaccinations, it could be “slightly misleading” given that it is just one tool in an arsenal of measures required. He explained that moving forward, it was important for Malaysia to err on the side of caution when it comes to doing away with non-pharmaceutical interventions such as wearing face masks and ensuring social distancing in public spaces.

“I think some countries may have done this too early, especially with the B16172 variant which is far more transmissible than the original version of the virus,” said Khairy.

He added that Malaysia was making inroads into preparing to live with the virus by introducing testing as part of everyday life. He said that discussions were being held with neighbours Singapore to collaborate on a COVID-19 breathalyser test.

The BreFence Go COVID-19 breath test system, which was developed by Breathonix, a spin-off company of the National University of Singapore (NUS), can generate results within one minute and has received provisional authorisation from Singapore’s Health Sciences Authority (HSA).

During the webinar, Khairy presented a slide showcasing the percentage of the population in some Asian countries which has received at least one dose of the COVID-19 vaccine.

The graph indicated that Malaysia had a higher percentage of its population who has received at least one dose, as compared to some of its neighbouring countries.

“Even compared against a country like Japan, we are slowly creeping up towards Japan,” he added.