In a press conference after chairing the Central Disaster Management Committee meeting, he said: “Long-term solutions are needed urgently so that no matter how heavy the rain is, floods can be managed well.”

He said although the government was told this would involve huge costs, such efforts when completed could ensure good long-term flood management until 2100.

The costs include a MYR15 billion (USD3.4 billion) flood mitigation project implemented by the previous government under Ismail Sabri Yaakob.

Ahmad Zahid, who is also the Rural and Regional Development Minister, added that a long-term solution is needed to address the issue of stagnant water after floods. 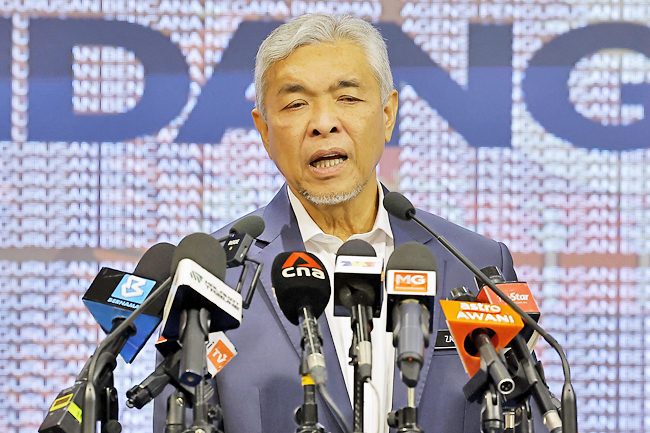 “For areas that are below sea level, it should also be resolved on a long-term basis because the problem of stagnant water due to floods occurs in many places in our country.

“We have asked for coordination with the Drainage and Irrigation Department (DID) so that a solution can be found quickly as it is linked to the problem of economic growth and people’s livelihood in places where stagnant water gathers due to floods,” he said.

Ahmad Zahid said the government would also get volunteers involved in combatting and managing floods. “For the first time, we are including voluntary bodies or volunteers in the (central disaster management) committee and we want similar involvement at the national, state and district levels as well as relief centres.

“This will not only ease our burden of duties, but also lead to better effectiveness in solving flood problems, especially concerning victims,” he added.

Local media previously reported that Prime Minister Anwar Ibrahim had ordered the Finance Ministry to suspend the channelling of MYR7 billion which had been approved and awarded without undergoing tender, under the flood mitigation projects implemented under Ismail Sabri’s administration. On December 8, Bernama reported Melaka Chief Minister Sulaiman Ali saying that the state government asked Anwar to review the aforementioned decision to suspend the MYR7 billion flood mitigation projects as it would affect mitigation efforts in the state.

According to the Star, the Malaysian Meteorological Department (MetMalaysia) warned that the north-east monsoon is predicted to bring about continuous rain for four days, from December 17 to 21, on the east coast states of the Peninsula.

MetMalaysia director-general Muhammad Helmi Abdullah reportedly said the wet weather is expected to last until early next year due to the monsoon and the La Nina cycle.

“A rise in the sea level is expected in waters in these states, and there is a risk of seawater flooding on the coast. MetMalaysia is monitoring this situation and will issue a ‘Continuous Heavy Rain Warning’ if needed,” said Muhammad Helmi, as quoted by the Star.

Meanwhile, Ahmad Zahid on Tuesday also said that with the cooperation of MetMalaysia, some areas where the amount of rainfall is high and expected to cause flooding will be focussed on.

“The preparedness that has been done includes using a new template where the MetMalaysia forecast will be used as a guide to activate temporary relief centres for victims before a flood occurs in the area,” he said.