Brunei Darussalam’s combat sports practitioners have demonstrated their prowess on the international stage with a series of impressive performances at major competitions in recent years.

With back-to-back gold medals, having also won gold in the Philippines in 2019, Mohammad Adi Salihin has also become one of the highest decorated national sportsmen in the country.

The national team has collected medals and podium finishes and gained recognition among the global sporting community.

The Sultanate’s leading athletes in specialised martial arts have proven their abilities against not only the region’s but also the world’s best.

This year has witnessed national excellence in wushu and pencak silat – disciplines that Brunei has shown strength in – with a flurry of medals at the SEA Games. 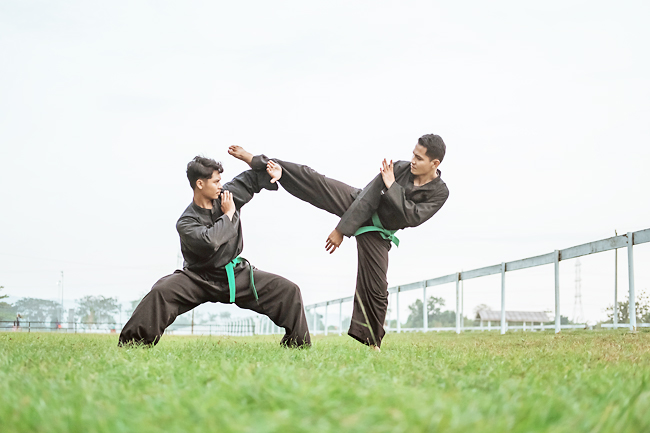 In July, the men’s and women’s teams both bagged bronze in the prestigious 19th World Pencak Silat Championships 2022 in Melaka, Malaysia.

The competition had been delayed since 2020 due to the pandemic, but went back on track with the easing of travel restrictions.

The Brunei men’s team lost to Indonesia in the semi-finals while the women’s team, fresh from their success at the 31st SEA Games in Hanoi, Vietnam missed out on a place in the final following defeat to Singapore in the last four.

Such were Brunei’s feats, that they are considered medal contenders for future meets.

The national team will set their sights on representing the country, should 32nd SEA Games host Cambodia include pencak silat.

“We have a ticket for the men’s and women’s singles and team matches next year.

“These four (tickets) are confirmed for Cambodia. We have qualified for the event.”

He added, “They are the highest-ranking athletes in Brunei.”

Indonesia will host next year’s World Championships and re-elected PERSILAT President Prabowo Subianto has promised 83 countries will be able to participate.

He also pledged to sponsor six tickets to each country as well as mattresses and body protectors.

The Sultanate has also seen the emergence of new talents.

Youngster Muhd Ali Saifullah Abdullah Muhd Suhaimi started as a novice in 2018 but ascended into a medal-winning national athlete following his bronze medal exploits at the 31st SEA Games in Hanoi, Vietnam.

He followed up his success with another bronze at the 19th World Pencak Silat Championships in Melaka in the men’s team event, alongside national teammates Mohd Hazim Ramliee and Muhd Haziq Azwa Muhd Iman Safwan.

The women’s trio of Anisah Najihah binti Abdullah, Nur Wasiqah Aziemah Rosihan and Norleyermah binti Haji Raya had enjoyed success before the COVID-19 pandemic when they took silver in the 8th Singapore Open.

After a lengthy and disruptive break following the health crisis, the trio showed little rust as they claimed bronze at the SEA Games and World Championships in a span of a few months.

In wushu, national sensation Basma Lachkar – who rose to prominence in the 2017 SEA Games in Kuala Lumpur as a 15-year-old – enhanced her profile after winning gold at the highly-prestigious World Games at the Bill Battle Coliseum in Birmingham, United States (US).

The duo contributed the country’s first medals at the World Games – touted to have the same prestige as the Olympics – since its inception in Santa Clara, US.