Making the best out of a bad situation

JABALIA, PALESTINIAN TERRITORIES (AFP) – Living in one of the poorest parts of the Middle East and facing some of the region’s highest fuel costs, Palestinians in Gaza are burning plastic to make affordable diesel.

It’s an economic and practical solution in a territory blockaded by Israel for 15 years, but one which poses serious environmental and health risks, experts say.

Standing before rusty metal machinery and fuel containers, Mahmoud al-Kafarneh described how he and his brothers came up with their plastic recycling project.

“We started experimenting to implement the project in 2018, through searching the internet,” he told AFP, at the site in the Jabalia area of northern Gaza.

“We failed a few times; after eight months we succeeded in extracting the fuel.”

The distilling setup features a series of crude-looking tanks and connecting pipes set up outside on the dirt.

The process starts with the burning of wood in a furnace below a large mud-covered tank holding up to 1.5 tonnes of shredded plastic. When the plastic melts, the vapours flow through a pipe into a water tank where they cool and drip as fuel into containers, ready to be sold. 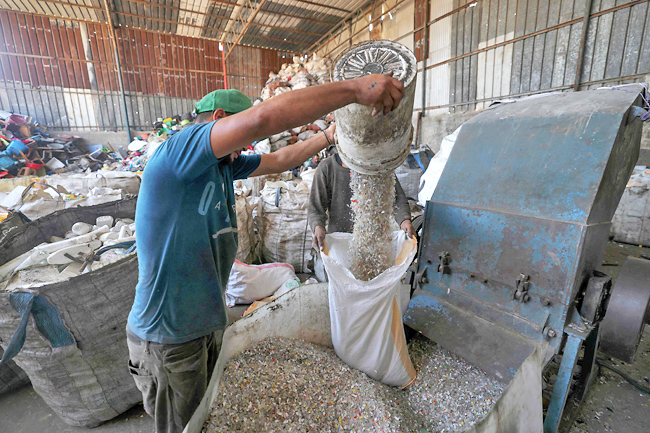 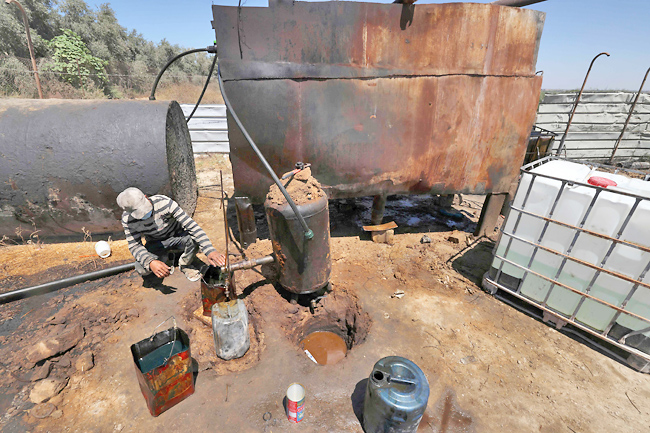 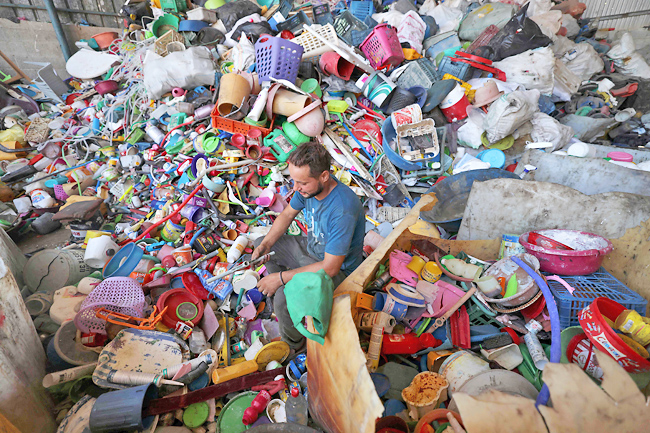 Black-grey smoke pours from several pipes extending above the furnace and the tank holding the plastic.

Only a few of the workers wear face masks and gloves as they melt bagfuls of shredded plastic. Their clothing is stained black.

Kafarneh said no-one has experienced health problems since starting work at the site, which sits beside olive trees and away from residential buildings.

“We follow all safety procedures at work”, he said.

But Director of Gaza’s National Institute for the Environment and Development Ahmed Hillis fears an environmental catastrophe from this unregulated industry.

“The method used is rudimentary and very harmful to the workers,” mainly because they inhale toxic fumes, he told AFP.

Burning plastic releases dioxins, mercury and other toxic gases which pose “a threat to vegetation, human and animal health”, according to the United Nations Environment Programme.

Hillis adds another danger of burning plastic, which is derived from petroleum hydrocarbons.

The tank is “a time bomb because it could explode” from the heat, he said.

In Gaza, where exchanges of fire between Palestinian militants and Israel for three days earlier this month killed at least 49 Palestinians, health risks are outweighed by economic reality.

Kafarneh, 25, said he would ideally upgrade their kit to a safer tank operated by electricity.
“But it’s unavailable due to the Israeli blockade,” he said.

Since 2007, when the movement Hamas seized control of the Gaza Strip, Israel has severely restricted the flow of people and goods in and out of the coastal enclave where 2.3 million people live.

The territory is increasingly impoverished.

Unemployment has hit 47 per cent and the average daily wage is around ILS60 (USD18), according to the Palestinian Central Bureau of Statistics.

Petrol delivered from Israel shot up to ILS8 (USD2.40) a litre in Gaza, after Russia’s invasion of Ukraine sent global fuel prices spiking, before a pullback.

That sent demand soaring for Kafarneh’s fuel, with fishermen and farmers among the top customers.

At the portside in Gaza City, Abd al-Muti al-Habil is using a hose to fill the tank of his fishing boat.

“We use this diesel because it’s half the cost of the Israeli equivalent,” he said.

“There are no disadvantages. It’s the same quality, it doesn’t affect the motor and it’s working efficiently.”

The only problem for Habil is the shortage of supply, with around 10 boats currently using diesel made from recycled plastic.

“Unfortunately the quantities are not enough. I barely get 500 litres every two days,” he said.

Habil’s boat burns through 900 litres of fuel during 12 hours at sea, quantities which are unaffordable if he relies solely on imported fuel.

One tankful of plastic can produce 1,000 litres of fuel every 12-14 hours, but Kafarneh’s team must wait eight hours for the equipment to cool before they can restart the process.

The amount produced also depends on the availability of raw materials. At a sorting facility near the distilling site, six men are combing through a towering heap of baskets, bowls, buckets and other plastic waste.

“We get the plastic from workers who collect it from the street. We buy it from them, then we separate it and grind it through a special machine,” said Imad Hamed, whose hands are stained black from the work.

With the grinder relying on electricity, Hamed said they are frequently interrupted by Gaza’s chronic power cuts.

“We have to work at night sometimes, to coincide with the availability of electricity,” he said.