“When I first got to San Diego, you could stay on the beach all day long (and) you wouldn’t see a turtle,” Pace said of the large Pacific green turtles, which are listed as “threatened” under the Endangered Species Act. “There was conservation on both sides of the border (with Mexico). Now we’re seeing the fruits of our labours.”

Pace, who lives in Monterey, California, can watch some of these conservation stories unfold in the stretch of Pacific Ocean that’s practically in his backyard. He said one thing that has fuelled the successes is technology, such as attaching satellite tags to swordfish.

“How can you help manage them if you don’t know where they are, and where they’re travelling to?” said Pace, who studied science before he took up photography.

He has a graduate degree from the Scripps Institution of Oceanography in San Diego.

The tags have helped researchers find out that swordfish often swim at 700 to 1,200 feet under the surface, below where many other marine animals are found. The researchers designed fishing gear to target the fish at that depth. So there’s less bycatch, or marine animals caught by accident. “They’re catching like 99 per cent clean,” Pace said, meaning that the local fishery has eliminated almost all bycatch. 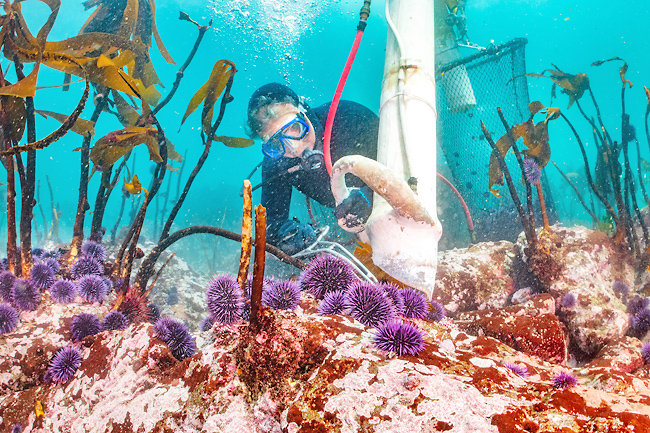 Some of his photos have helped explain that process, which cost money and caused swordfish prices to increase. “You need to inform people because they’ll say, ‘Why should I pay more?’ “

The loss of kelp forests along the coast is one of those stories. Kelp, brown algae that grow in shallow water, provide food and shelter for a variety of marine life.

An unusual ocean heat wave several years ago and a disease that killed off a sea urchin predator disrupted the kelp’s ecosystem.

“People say, ‘Those urchins are nasty. We need to kill them’,” he said. But killing a species that belongs in the area isn’t a simple fix.

“Everything is more complicated, and actions that we take have consequences.”

Scientists are testing whether reducing the urchins will bring back the kelp, and Pace has dived with them to document their efforts. Pace, who is 37, said he hopes he can tell stories for years to come, perhaps one day with his two kids, who are ages five and three.

He wants them to experience moments like a bait ball he observed 300 miles off the coast of Mexico. About 1,000 sharks, dolphins and large fish worked together to feed.

“That’s like what the oceans used to be,” he said. “I hope my kids get to see that.”