THE WASHINGTON POST – I feel especially lucky to get dozens of emails every day from readers. It’s like I suddenly have tens of thousands of penpals, all over the world!

Over the week, Washington Post reader James Felder wrote to me about baba ghanouj, the eggplant-based dip which has many variations, and goes by other names throughout the Levant, including abugannuş (in Turkey), salat atzilim (in Israel) and mutabbal (in Syria).

Still, baba ghanouj might be my favourite name for the dish, because of what it means: “Baba is the Arabic word for ‘father’ as well as a term of endearment,” Gil Marks said, while ghanouj or ghanoush means “indulged or pampered”. Marks noted that it’s not clear whether there was a baba who indulged in this dish, or if baba here refers to “the eggplant, which is considered the most important (big daddy) of vegetables”.

In any case, Felder wrote, “I have a nice tip… I used to buy baba ghanouj in the stores… For years I’ve been trying to make one at home I like.” Recipes for the dish don’t vary much: Roasted, grilled, flame-cooked or broiled eggplant is peeled, and the pulp is mixed with tahini, lemon juice, salt and sometimes other flavourings and seasonings which vary from region to region and cook to cook, including garlic, herbs, cumin and coriander.

Inspired by a recipe he found in Honey & Co: The Cookbook from the well-regarded London cafe, and his favourite store-bought brand, which contained mayonnaise among its other ingredients, Felder said he “finally made a batch that I loved”. 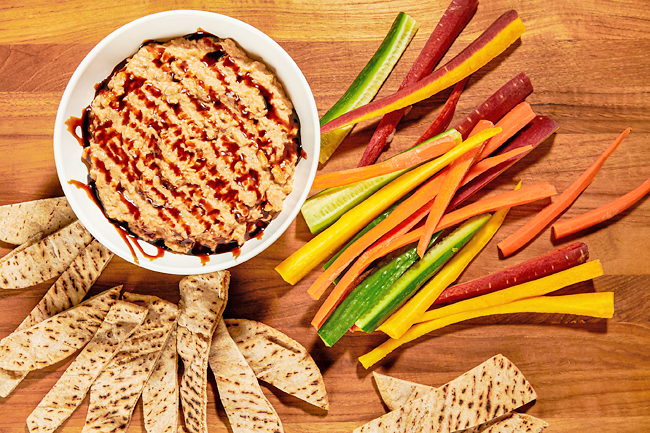 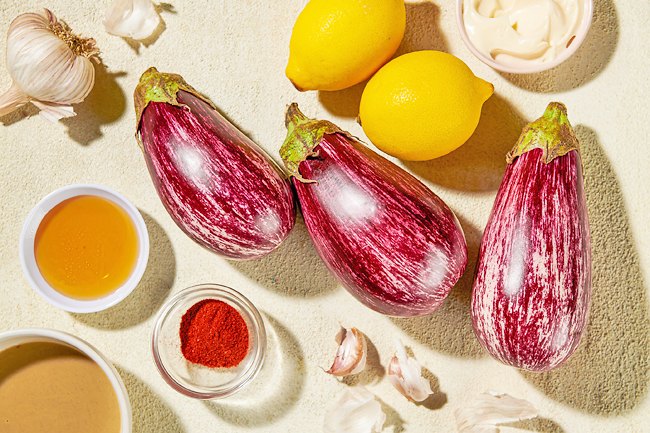 “The best way to roast an eggplant is over charcoal,” chefs Itamar Srulovich and Sarit Packer wrote in Honey & Co, noting that it’s easy to throw them on the grill if you have one – but even they “rarely – if ever – barbeque”. So, they turn to their broiler. Broiling is a mostly hands-off cooking process that will turn the eggplant into a puddle of tender pulp and leathery skin in minutes. It will also give the vegetable some of the characteristic smoky flavour that makes baba ghanouj so good.

To this mixture, Felder added honey (“to counteract any bitter notes” from the eggplant), smoked paprika (“to heighten the smokiness”) and mayonnaise (“to make it creamy and rich”). For those who may be raising their eyebrows at these additions, Felder said that because of the strong flavour of the eggplant and tahini, you don’t really taste the other ingredients so much. “They just make it more baba ghanouj-y,” he wrote.

His e-mail made it sound so good, and so easy, that I had to try the recipe for myself. Felder is not wrong: This is a baba ghanouj that’s easy to love.

In the recipe, I’ve suggested quantities for each ingredient, but don’t feel like you have to stick with them. You may want more or less of each – and that’s just fine.

As you season, you take a spoonful, and if you don’t immediately want to sneak another spoonful, keep adding!”

Add a drizzle of pomegranate molasses for another hit of sweet and sour, before serving it with pita and fresh vegetables for dip for dinner.

Position a rack about six inches from your oven’s broiler element, and preheat on high.

Line a rimmed baking sheet with foil, if desired. Using the tip of a sharp knife, pierce each eggplant twice.

The skin will become crisp, and the eggplant’s juices will begin to run when they’re ready. Remove from the oven and let cool for 10 minutes.

Place the eggplant on a large plate or platter and pull some of the blackened eggplant skin off so you can see some of the flesh and, using a spoon, transfer the roasted eggplant pulp – which will be very soft, and almost a puree – into a medium bowl. Discard the skins.

Transfer the baba ghanouj to a serving bowl and top with a drizzle of pomegranate molasses and pomegranate seeds. Serve with warm pita or vegetables for dipping.