Issues relating to elements of corruption or misconduct in the National Housing Scheme (RPN) projects; the use of cheaper construction materials; RPN houses and apartments left lying vacant; and the renting of RPN houses to others were highlighted by His Majesty Sultan Haji Hassanal Bolkiah Mu’izzaddin Waddaulah ibni Al-Marhum Sultan Haji Omar ‘Ali Saifuddien Sa’adul Khairi Waddien, Sultan and Yang Di-Pertuan of Brunei Darussalam in a titah during a surprise visit to the Ministry of Development (MoD) and the departments under it yesterday.

“The MoD is entrusted to the provision of public infrastructure including houses, roads, water supply, as well as sewerage and drainage, a clean environment, and the use of land and facilities for the development of industries,” said His Majesty.

“Judging by the involvement in various projects, there are opportunities for criminal elements or misconduct to occur in this country, since corruption can weaken the administration and demolish the nation. As a religious community, we must remember that corruption is a bridge to hell.

“The ministry is urged not to carry out work that brings losses to the government and the people. For instance, they are urged not to choose just any contractor for project development, but to choose one with a good track record.

“People can be influenced by contractors from abroad, thinking that they would produce good quality work. On the contrary, some of them use cheaper materials to get more profit.

“It is so unfortunate that the responsible parties in the government did not monitor or scrutinise this matter. Or they knew about such matters, but choose to collaborate and deceive, for the sake of gaining remuneration through the back door.

“As a result, the completed houses are badly damaged at the beam structures, with water pipes falling apart due to collapsing soil, damage to the ceilings and leaks in the showers.”

His Majesty then mentioned the apartment block at No H40 at RPN Kampong Lambak Kanan, which has 300 units and comes equipped with various facilities including a multi-storey car park, a leisure area and a playground, yet still remains vacant since its completion two years ago.

His Majesty inquired as to why the apartment block was still vacant.

The monarch also cited Jalan 99 in RPN Kampong Rimba, a terrace housing project that was suddenly discontinued and is now covered with tall grass.

“Meanwhile in the Kampong Mengkubau National Housing Project, there are 1,000 houses for such a programme, but it seems that the programme has also been discontinued, with the houses sustaining some damage. This was under the previous Brunei Economic Development Board (BEDB) and handled by a foreign contractor,” said His Majesty.

“One thousand houses is not a small number, while the cost of construction is not cheap. Who is to be blamed with regard to this matter?”

His Majesty also cited another example at RPN Kampong Meragang in Jalan Binglu, where several houses described as ‘unsafe’ are standing vacant.

“Why are they not safe? This requires an explanation, so that we may learn something from it,” said the monarch.

“These four issues should be taken seriously and must not be viewed lightly. We must seek and identify the root cause of the problem. Why did these damages occur, and why were these houses left lying vacant and unsafe for occupants? And how did these issues come about?

“The relevant agencies must act to find out the causes. Why were these projects discontinued? Was it because we chose the wrong contractor or developer, or were the houses damaged due to the fact that the developer or contractor deceived us by choosing cheaper materials?

“If this is true, then why did the responsible parties allow cheaper materials to be used, and why were no safety factors taken into account before construction? All of these require responsibility from the relevant agencies in the government.”

Regarding the housing scheme under the Housing Development Department, His Majesty highlighted the issue of house owners under the scheme who rented their houses to other locals or to foreign workers.

“In the agreement, the rules and regulations state that these houses should not be rented to others to live in or to carry out businesses such as office premises, retail shops, or food stalls, or to sell/pawn the land or house to others.

“Regulations concerning these have been clearly stated. If the relevant agencies take firm action, based on the regulations, then such violations would not occur. I want to see them being implemented, instead of just looking good on paper.

“These are the pressing issues to be dealt with. I want the relevant ministries to take note and act,” said His Majesty, concluding the titah.

His Majesty first toured various divisions and units at the MoD building, before crossing the road towards the adjacent buildings that accommodate the Lands Department, the Survey Department, the Town and Country Planning Department and the Housing Development Department. 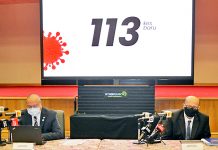 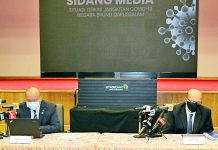 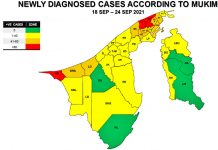