Maitreyi Ramakrishnan shifts from Devi to ‘My Little Pony’

LOS ANGELES (AP) – Maitreyi Ramakrishnan’s (AP pic, below) childhood devotion to My Little Pony turned out to be homework for her latest TV project.

Ramakrishnan stars in the voice cast of Netflix’s new animated children’s series My Little Pony: Make Your Mark, a sharp contrast to her breakout role in the acclaimed coming-of-age comedy Never Have I Ever.

The Canadian actor, 20, recalled growing up with the fourth iteration of the toy line that included what she wryly calls “the OG’s of Twilight Sparkle and Rainbow Dash, my personal favourite”.

Playing the character of Pegasus pony Zipp, short for Princess Zephyrina Storm, was a chance to fulfil “those childhood kind of dreams”, Ramakrishnan said.

Zipp stands out among her equine pals – and not only because of her bold, two-tone hair style.

Ramakrishnan describes her as smart, curious and determined to be herself. A bonus: The actor calls it “very cool” that she got to sing on the companion album for the series. 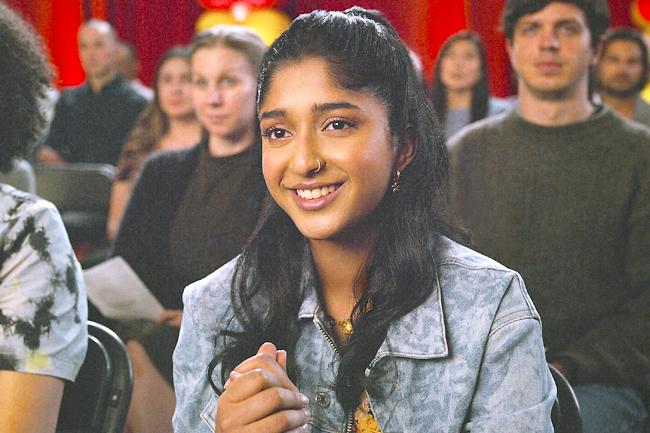 Ramakrishnan, whose Tamil parents emigrated from Sri Lanka, spoke to The Associated Press (AP) her new series; her thoughts on Never Have I Ever, and the ongoing struggle for inclusivity in Hollywood. Remarks have been edited for clarity and brevity.

AP: You’ve described Zipp in positive terms. Is there something else compelling about the series, something you believe children may get from watching it?

RAMAKRISHNAN: It’s really great because it’s showing kids that there’s a place for everyone.

All of the main characters are very different and unique personalities, and have different interests and likes. I hope kids just take away that they can be themselves and people will love them for that.

AP: You’ve talked before about growing up without seeing a TV or film character who looks like you ethnically and who you could relate to.

RAMAKRISHNAN: I think I only got to unpack this once I started Never Have I Ever and was asked in many interviews, “Who was your representation (on screen)?” I didn’t really have that.

And I realised maybe this is why I always had such an affinity to animation as a child.

AP: Your role as teenager Devi on the Mindy Kaling-co-created Never Have I Ever is a rarity, a lead Southeast Asian character. How have viewers responded?

RAMAKRISHNAN: Positive reaction to seeing my character, or mixed emotions in the sense of people feeling so uncomfortable with how much they see themselves in the characters.

But it’s not just from the young brown girls that see Devi and think, “Yeah, I can relate.”

There’s the brown guys. Or any girl who’s experiencing life struggles, or just any guy who’s experienced that feeling of wanting to be a part of something.

That’s representation to me, when you’re writing characters that have a diverse faces but are written so well and so realistically that it’s not tokenism.

It’s so important, and I’m honestly not satisfied with how much representation there is.