Ambassador of Indonesia to Brunei Darussalam Dr Sujatmiko yesterday called on his countrymen to maintain unity and solidarity, help each other overseas, and maintain mutual harmony.

“I will never be tired of reminding the Indonesian community in Brunei Darussalam to always comply with laws and regulations in the Sultanate,” said the ambassador.

Ambassador Dr Sujatmiko also conveyed the role of the embassy in serving Indonesian citizens in Brunei and the strength in Indonesia-Brunei Darussalam bilateral cooperation, including helping the economic recovery of the countries.

He said this during a ceremony hosted by the Embassy of Indonesia in Brunei Darussalam to mark the 77th anniversary of the country’s independence at its compound yesterday.

For the first time since the start of the COVID-19 pandemic, hundreds of Indonesians in the Sultanate participated. The event was attended by embassy officials and staff along with guests, comprising Indonesians residing in Brunei, donning traditional attire.

The event was marked by a flag hoisting led by the ambassador as Ceremony Inspector. Major Caj Tinton Kurniawan acted as the Ceremony Commander. 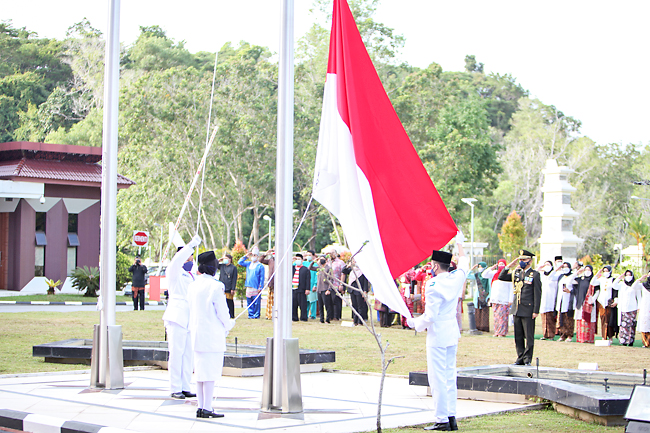 The flag hoisting was accompanied with the national anthem Indonesia Raya, sung by every Indonesian present.

The ambassador led a moment of silence to commemorate those who had given their lives to achieve Indonesia’s independence.

The ceremony ended with the recitation of a Doa for the progress and prosperity of the nation and state.

Awards were also presented, including the 30-year Satyalancana Karya Satya Award to the embassy’s Home Staff.

The Award Charter was presented to Indonesian citizens who contributed to providing services to the Indonesians in the Sultanate and participating in the Indonesian Culinary Promotion.

In addition, awards were also given for services as local employees at the embassy with tenures of more than 20 years and more than 10 years; and for the Best Performing Local Employee in 2022.

The celebration ended with an aubade performed by 20 children aged between five and 12, dressed in traditional clothes singing national and regional anthems.

The ambassador, deputy head of the Indonesian Embassy, diplomats, embassy staff, and their families also wore traditional attire to the event.