AP – There is not a cynical molecule in the makeup of George Miller’s Three Thousand Years of Longing, a patient and occasionally dazzling fantasy about love, myth, hope, companionship and perhaps, most of all, about storytelling.

Idris Elba and Tilda Swinton, wrapped in plush white bathrobes, will reiterate the storytelling point over and over again during a vulnerable, sprawling conversation in a stately Istanbul hotel suite that’s nice enough to make one consider a career in academia.

Though the setting and wardrobe might feel familiar, this story is anything but. Only one of the parties, Swinton’s Alithea Binnie, is human. Elba is an immortal djinn, the fancy term for “genie”, whom Alithea has stumbled upon in a small, striped glass bottle in an unsorted bin of an Istanbul antique store.

In most stories, the ability to suddenly get your heart’s desire with a wish comes as good news, at least at first. 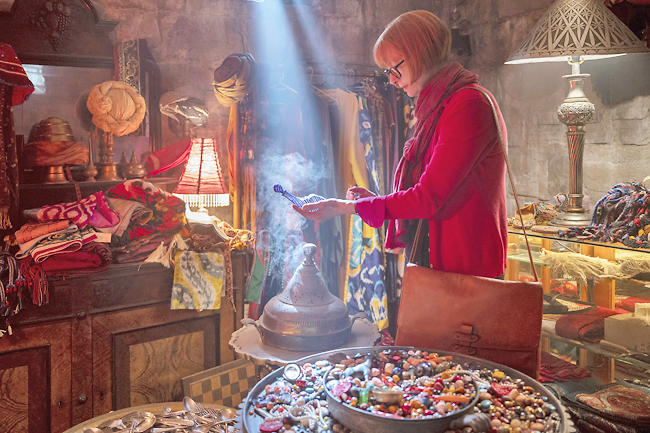 But Alithea isn’t one who has a list of wants. Not only is she a proud, contented single and child-free woman – she’s also a “narratologist” who is so well-versed in mythology that she knows all the ways in which wish-making and granting can go wrong.

And yet by not fulfilling her duty to make three wishes, she also is condemning the djinn to nonexistence. He tries to convince her otherwise, by telling fantastical stories from his past, spanning some 3,000 years, and all the times he was sent back to the bottle for caring too much about the wisher, from Sheba (Aamito Lagum), to a servant who longs for a prince, Gulten (Ece Yüksel), and finally child bride of an old merchant who desires knowledge, Zefir (Burcu Gölgedar).

These stories are enchanting, brutal, sensual, grotesque and often involve power struggles and irrational decisions made for love. Miller gets to play in a wide array of cultures as the djinn skips through time, all with their own shimmering palettes and fairy tale hyperrealism.

At times, you may grow impatient wondering what it’s all building towards and if you even care, as Alithea doubles down on her stance that she’d rather not make any wishes at all.

But she, and the audience, are in for a surprise. It’s the kind of moment that doesn’t make a lot of emotional sense on paper, but that’s why we go to the movies, isn’t it? Swinton and Miller make it work.

You don’t get a more literal depiction of master and servant than that of genie and the person who released them, and here, the fact is that the djinn is Black and the human is white. But Three Thousand Years of Longing does not seem like the kind of movie that is internationally embracing this idea. One could even argue that Elba’s djinn exists outside of race somehow. Would it have made a difference if he was blue?

Or perhaps the phrase, like the Bechdel Test, was never supposed to be a literal line of demarcation between movies that are acceptable and movies that are not, but a way of talking about representation and, yes, storytelling. Maybe, like Swinton herself once said when faced with criticisms around the race of another fictional character, it can all be true.