Living on the edge

CALIFORNIA (AP) – A fire-stricken Northern California town has long been seen by passers-by as a whimsical spot to stop along Interstate 5 and buy an ironic T-shirt, but residents said they’ve grown edgy in recent years due to a new danger: Dark skies, swirling ash and flames that race so quickly they leave little time for escape.

Their fears exploded to life again in recent days as California’s latest inferno burned homes and buildings and forced evacuations in the small community about 451 kilometres northeast of San Francisco.

Among the thousands of people displaced was Naomi Vogelsang. Her home destroyed, dog missing, and 10-year relationship with her boyfriend recently ended – all she could do on Saturday was sit outside a wildfire evacuation centre with USD20 in her pocket, waiting for a ride.

The day before, flames raced from Roseburg Forest Products, which makes wood products, into Lincoln Heights neighbourhood where a significant number of homes burned and residents had to flee for their lives.

The blaze known as the Mill Fire had spread to over 17 square kilometres by Saturday evening and was 25 per cent contained. 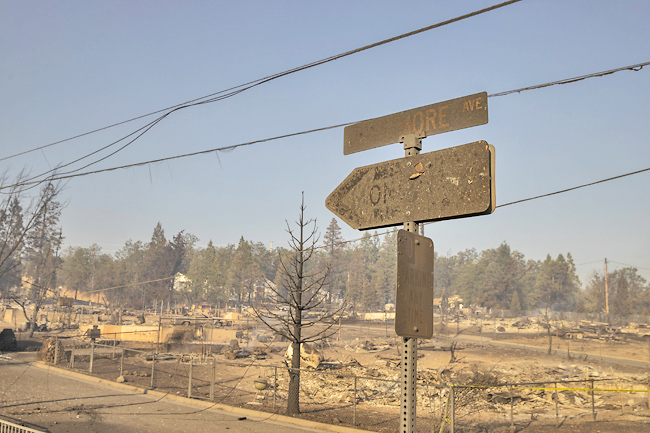 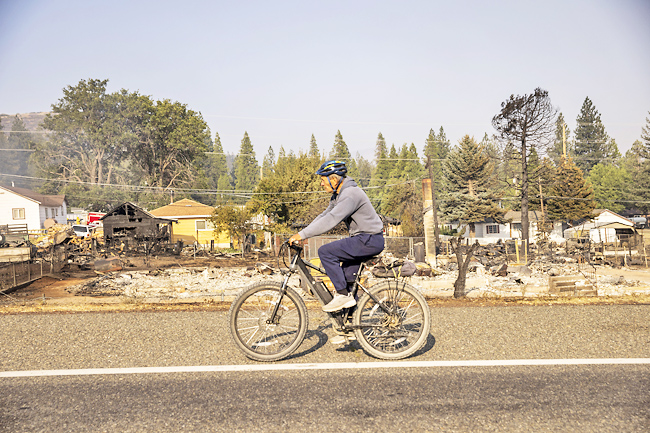 After fleeing the fire, 63-year-old Judy Christenson remembered a similar escape 40 years ago when, as a young parent, she had to rush her children out of a burning home. Last summer, a wildfire forced her to evacuate and leave her pets behind. Now, Christenson said she leaves harnesses on her pets all the time so she can grab them at a moment’s notice and leave. “Whenever this happens, I get really bad,” Christenson said from the front seat of a car at an evacuation centre in Yreka as Felix, her orange cat, napped in the backseat.

Nestled in the shadow of Mount Shasta – a 4,267-metre volcano that is the second-highest peak in the Cascade Range – in the town is no stranger to wildfires.

Strong winds in the area that fan flames drew the town’s founder for a very different reason.

Civil War soldier Abner, who is said to have witnessed the Confederate General Robert E Lee’s surrender before moving to California, chose to put a sawmill there because the wind would dry out the timber, according to Bob West, a lifelong resident who co-owns Ellie’s Espresso and Bakery, a coffee and sandwich shop that contains some historical items of the town’s past.

The winds make the town and the surrounding area a perilous place for wildfires, whipping small flames into a frenzy. The town has seen three major fires since 2014, a period of extreme drought that has prompted the largest and most destructive fires in California history.

That drought persists as California heads into what traditionally is the worst of the fire season.

Scientists said climate change has made the West warmer and drier over the last three decades and will continue to make weather more extreme and wildfires more frequent and destructive.

Dominique Mathes, 37, said he’s had some close calls with wildfires since he has lived in the town. But he’s not interested in leaving.

“It’s a beautiful place,” he said. “Everybody has risks everywhere, like Florida’s got hurricanes and floods, Louisiana has got tornadoes and all that stuff. So, it happens everywhere. Unfortunately here, it’s fires.”

Evacuation orders were quickly put in effect on Friday for 7,500 people – including West, who is 53 and has lived in Weed since he was a one-year-old. He had never had to evacuate for a fire, but now he’s had to do it twice.

“It’s way worse than it used to be,” he said. “It affects our community because people leave because they don’t want to rebuild.”

California Fire Siskiyou Unit Chief Phil Anzo said crews worked all day and night to protect structures in the town and in a subdivision to the east known as Carrick Addition. He said about 100 structures were destroyed.

Two people were brought to Mercy Medical Centre Mount Shasta. One was in stable condition and the other was transferred to UC Davis Medical Centre, which has a burn unit.

“There’s a lot at stake on that Mill Fire,” Anzo said.

“There’s a lot of communities, a lot of homes there.”

Evacuees and firefighters quickly filled up local hotels while the others rushed to stay with family and friends outside of the evacuation zone.

Vogelsang was not as fortunate. She said she slept on a bench in the town until she could get a ride to the evacuation centre. She said she’s spent most of the time crying about Bella, her 10-year-old English bulldog who – despite her best efforts – would not follow her out of the fire and is lost.

“My dog was my everything,” she said. “I just feel like I lost everything that mattered.”