Liverpool will not panic buy despite Thiago injury, says Klopp

LIVERPOOL (AFP) – Liverpool manager Jurgen Klopp does not envisage the Reds dipping into the transfer market to reinforce their midfield before the end of the summer window despite a hamstring injury to Thiago Alcantara.

The Spanish international is expected to be out for four to six weeks, leaving Liverpool light on midfield options with Alex Oxlade-Chamberlain and Curtis Jones also sidelined.

Midfield was already arguably the weakest area of a Liverpool squad that came within two games of winning an unprecedented quadruple of trophies last season.

But Klopp said the club would already have added in that area if they thought it necessary.

“I am happy with the strength, size and quality of my squad. We have injuries. Now it is the question how long the players will be out and there are different solutions,” Klopp said yesterday at his pre-match press conference for Monday’s (Tuesday, 3am Brunei time) clash with Crystal Palace.

“If there would be the right player we would have done it, we would do it, but I don’t see it because we had a lot of conversations already and it doesn’t look like something will happen.”

Klopp turned to 36-year-old James Milner off the bench to inject some life into the Liverpool midfield in a disappointing 2-2 draw at newly-promoted Fulham to start their Premier League campaign last weekend. 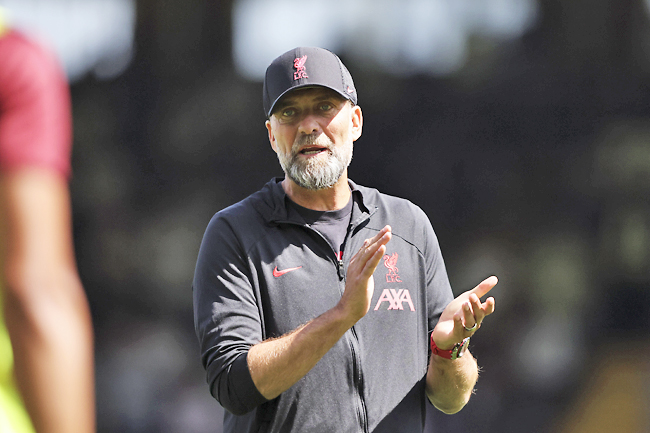