City manager Guardiola revealed he was a target for missiles hurled from the crowd after the visitors had a goal disallowed during the second half.

Guardiola was not hit by any of the objects but Liverpool, who won the game 1-0 courtesy of a Mohamed Salah strike, opened an investigation into the matter.

“We are aware of an incident involving objects being thrown into the technical area at today’s game,” said a club spokesman.

“This is totally unacceptable behaviour and not the standards of behaviour we expect at Anfield.

“This incident will be fully investigated using CCTV and those found guilty will be punished, including a lifetime ban from Anfield Stadium and a possible football banning order.”

It is not the first time there has been crowd trouble around games involving Liverpool and City at Anfield, with the rivalry between the two clubs having intensified in recent years.

In 2018, City’s team bus was pelted with bottles and other objects as it arrived at the Merseyside ground for a Champions League encounter.

Asked about the latest incident, Guardiola said sarcastically: “It didn’t get me. They try it again next year. All these coins, they tried, but didn’t get it. They got the coach years ago.”

Opposite number Jurgen Klopp said he had not been aware of the matter but apologised on behalf of the home club. 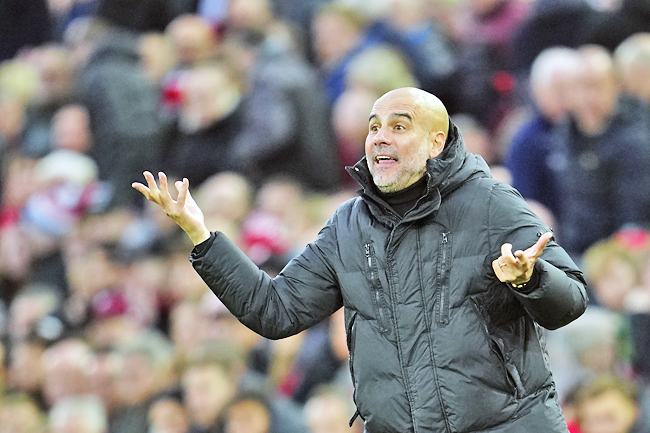