LIVERPOOL (AFP) – In need of another famous Champions League fightback, Liverpool cannot rely on a wave of passion, colour and noise from the stands at Anfield to inspire a comeback from 3-1 down against Real Madrid on early tomorrow (3am Brunei time).

If the English champions are to reach the semi-finals for the third time in four years, they will instead need their manager Jurgen Klopp to conjure the motivation and tactical masterplan to once again eliminate one of Spanish football’s giants.

Klopp has earned near deity-like status on Merseyside for delivering a sixth European Cup and a first league title for 30 years to Liverpool.

But the charismatic German has been unable to halt the Reds’ fall from grace this season.

With seven games to play in the Premier League, it is already mathematically impossible for Liverpool to retain their title as they lie 22 points adrift of Manchester City in fifth. 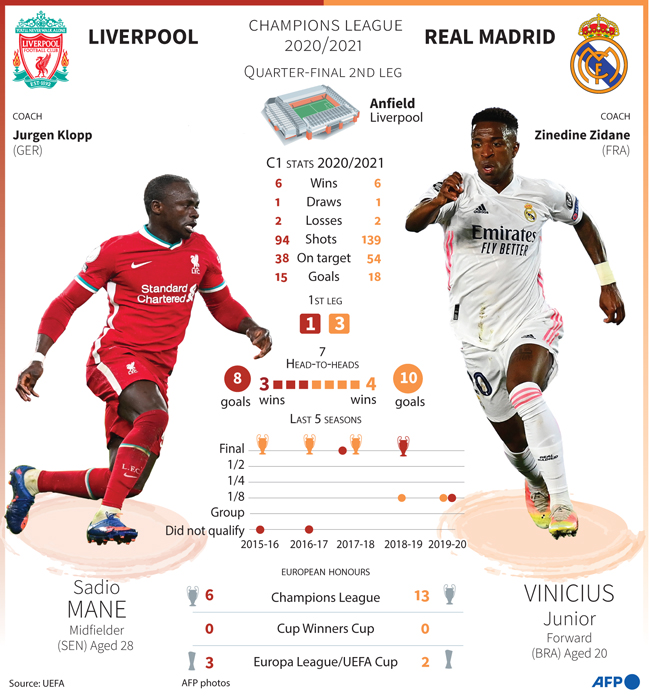 Hopes the Champions League could prove the salvation of a disappointing season were also dashed as Real ran riot in the first 45 minutes in Madrid last week to open up a commanding first-leg lead.

Liverpool’s deficit is not as steep as when Barcelona visited two years ago in the semi-finals in what turned out to be arguably the greatest of all the memorable European nights at Anfield.

Depleted by injuries, Klopp’s men still rolled over Barca’s stellar cast of star names 4-0 on their way to winning the trophy.

But Klopp hinted that the task may be even greater now in front of the sterile atmosphere of an empty stadium due to coronavirus restrictions.

“If you want to have some emotional memories, then you watch the Barcelona game back and 80 per cent of this game was the atmosphere in the stadium, so yes, we have to do it without that,” said Klopp after the first leg.

Liverpool can claim to have suffered more than most from an entire season behind closed doors.

Prior to January, they were unbeaten in 68 home Premier League games. That club-record run was followed by a less treasured one as for the first time Liverpool then lost six consecutive games at Anfield.

A late winner to beat Aston Villa 2-1 last Saturday snapped that streak, but only served to reinforce that Liverpool are not the force of the past two seasons.

On top of empty stadiums, injuries have also played a major role. Virgil van Dijk, Jordan Henderson, Joe Gomez and Joel Matip will again be missing for the visit of Madrid, while Thiago Alcantara and Diogo Jota’s first season at the club has been disrupted by lengthy layoffs.

Yet, Klopp has to also take his share of the blame for some of his side’s failings. The decision to drop Thiago in favour of Naby Keita, in just his second start since December, for the first leg last week backfired big time.

Keita was substituted for the Spanish international after just 42 minutes with Liverpool 2-0 down and chasing the shadows of Madrid’s midfield trio of Casemiro, Toni Kroos and Luka Modric.

The decision to shunt Fabinho into central defence to cover for the loss of three centre-backs to season-ending injuries for much of the campaign also served to destabilise two areas of the field rather than one.

Thiago and Fabinho are expected to be paired together for the match to try and wrestle control from Madrid’s talented triumvirate, but Klopp also has a big decision to make up front.

His patience with the poor form of Sadio Mane and Roberto Firmino has finally ran out as each has been benched for one of the past two games.

With Liverpool in need of goals, whoever Klopp puts his faith in alongside Jota and Mohamed Salah in attack needs to be clinical if their manager is to rediscover his midas touch.