THE WASHINGTON POST – In the intricate, exquisitely crafted movie The Father, Anthony Hopkins plays Anthony, an elderly gentleman living in a well-appointed flat in London, which he’s been sharing with his daughter Anne (Olivia Colman) until she informs him that she’s moving to Paris to be with a man she’s recently met.

Such is the inciting incident in what promises to be a wrenching but touching story of filial loyalty, agonising separation and self-discovery. But very little is what it seems in this meticulously constructed jewel box of a film, which reveals ever more complicating and contradictory facets as the reality of Anthony’s experience becomes progressively clearer.
Or murkier. Directed by Florian Zeller, here adapting his own play with the help of screenwriter Christopher Hampton, The Father is ostensibly about a man grappling with the onset of dementia, when simple recall and daily logic can become quandaries of existential depth. Is the woman he calls Anne really Anne?
Or is it another character entirely, played by Olivia Williams? Is Paul (Rufus Sewell) Anne’s husband or an interloping malefactor?

Anthony turns on the headlights for Laura (Imogen Poots), a sweet-natured caretaker Anne wants to hire before she departs for France. His twinkling, avuncular flirtation will ring true to anyone who has witnessed firsthand how convincing cognitively challenged people can be, when reflexive charm and muscle memory take over from the confusion that threatens to sink the whole ship.

Hopkins slips seamlessly into his role as the vulnerable, imperious, terrified and cantankerous Anthony; he’s lovable and exasperating in perfectly equal measure as he swims against the invisible tide of ageing and mental decline. The Father provides sensitive, superbly compassionate insight into many things, including the fragility of dignity, the ghost prints left by grief and love, and the abiding mysteries of consciousness itself.

Aided by a masterful production design by Peter Francis, Zeller plunges viewers into Anthony’s mind as it shifts and seizes, trying to make sense of a present that insists on blurring into the past. Not since Eternal Sunshine of the Spotless Mind has a filmmaker so thoroughly put the audience inside the experience of a protagonist, to such shattering
emotional effect.

As grim as the subject is, viewers might expect The Father to be a downer. But it’s such a powerful theatrical experience, and such a handsome chamber piece for the combined talents of its accomplished cast, that it’s improbably bracing. Its ingenious hall-of-mirrors construction transforms what could be a dull, maudlin wallow into a lively, improbably inviting battle of wits – between Anthony and the people who love and torment him, and between Zeller and the audience.

The Father, ultimately, is a paradox: as nuanced as it is bluntly direct, as tough as it is tender. In its own elegant, confounding, chimerical and compassionate way, it’s a lot like life. 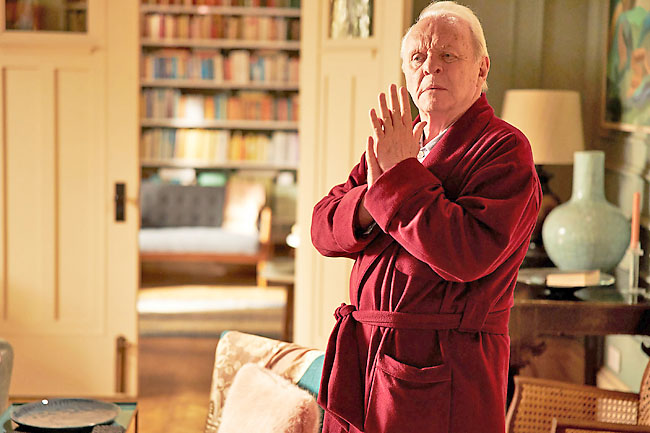