THE WASHINGTON POST – Kate Benjamin didn’t mean to amass a baker’s dozen worth of felines. They just sort of accumulated over the years as her two-bedroom Phoenix condo became a pit stop for stray animals that she intended – and often failed – to place elsewhere. She now lives with 13 cats (plus one other human, her husband) in 1,100 square feet. So if you have questions about keeping a litter box in a small space, Benjamin almost certainly has the answers.

She’s not just a recreational cat lady, either. She’s a professional. In 2012, she launched Hauspanther, a design resource for cat-owners; she’s also co-author of bestsellers Catification and Catify to Satisfy, both about creating cat-friendly – but stylish – homes.

Her own litter box routine involves scooping the 11 boxes in her condo multiple times a day, wiping them all down and refreshing litter once a week, and performing a monthly deep-clean that includes thoroughly scrubbing their interiors. All the while, she navigates the distinct preferences of her many four-legged companions. For instance, Horacio Queso, a black, short-haired gentleman, insists on exclusively using the boxes in Benjamin’s office and must be promptly let in each morning.

This is why, despite her years of research and firsthand experience, Benjamin emphasises that the true expert on litter box strategy in a small space probably already lives in your home: your cat. “You have to listen to what they are telling you,” she said.

WHERE TO PUT A LITTER BOX IN A SMALL SPACE

The worst thing about having a litter box in a small space also happens to be a benefit: because you can’t hide it away in a basement or laundry room, you’re probably going to do a better job remembering to clean it. “That’s better for you, it’s better for the cat,” Benjamin said.

When figuring out where to put the box in a small space, it’s important to choose somewhere the cat has privacy. When cats go to the bathroom, they’re “hardwired to think, oh, I just did something that could attract a predator”, said Benjamin, so they prefer a little seclusion. Do not, however, put the box in a closet, where dust and odour can build up without good air circulation. 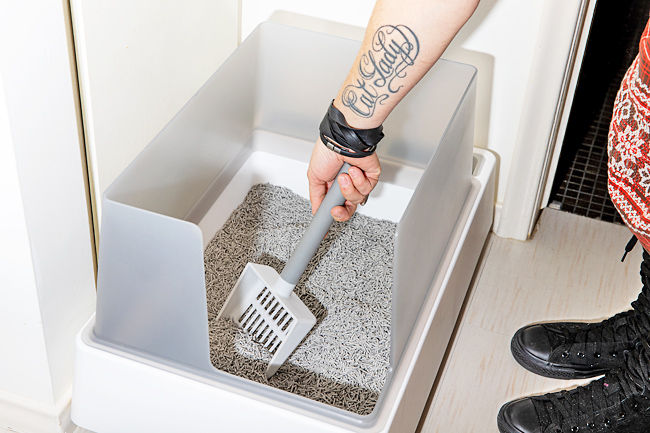 You’ll also want to avoid the kitchen, for the obvious reason that it’s unsanitary (not to mention, unappetising).

If the box must be in a high-traffic zone, Benjamin suggested putting a screen around it (actual litter-box screens do exist, but any room divider could work as long as it’s easy to wipe down). “That allows for a really nice air flow,” she said. “But it’s got a little bit of privacy and it’s really easy to move the screen and get back there and clean.”

No matter the location, keep a small vacuum or broom nearby to tidy up whatever your cat tracks outside the box. Benjamin swears by her cordless Dyson, which hangs on the wall.

Even meticulously maintained litter boxes still smell from time to time. An air purifier placed nearby can help. Benjamin advises choosing one that doesn’t make too much noise – which could deter your cat from using the box – and getting one with a HEPA filter that will remove dust and pet dander from the air.

Benjamin has another tool she swears by: crushed zeolite, a natural mineral she describes as “baking soda on steroids”. Also used in horse stalls, zeolite is safe for cats, even if they digest it. Mix it with your litter to tamp down smells.

Lastly, if you can’t immediately take your bags of scooped litter to an outdoor trash, consider getting a receptacle made specifically for litter-box waste, which will also reduce odours.

CHOOSING A LITTER BOX FOR A SMALL SPACE

If there is a litter box available on the market, Benjamin has almost certainly tried it. “I have as much variety as I can in a small space without covering the whole house in litter boxes,” she said. As with so many cat quandaries, figuring out which box is best for your pet may require some trial and error.

Top-entry models tend to be popular for small homes, because they take advantage of vertical space and, compared to lidless or side-entry boxes, they do a good job keeping litter contained. Still, this style won’t work for all pets, said Benjamin. If your cat is elderly or has mobility issues, she may have trouble climbing in and out.

Top-entry boxes also provide opportunities for cats to get ambushed by children or other pets as they try to exit. (The rare litter-box ambush in the Benjamin household is generally caused by two-year-old Sven, who can be “very volatile”). Plus, some cats don’t like being confined. One compromise that Benjamin likes is the Cove litter box from Tuft + Paw. It has high sides to keep litter in and includes a removable wall.

In a small space, you might also consider a triangular litter box, designed to fit neatly into a corner, such as the Kitangle seamless covered litter box, which Benjamin uses in her home.

Somewhat surprisingly for a woman with 13 cats, Benjamin isn’t a fan of robotic litter boxes that proclaim to be self-cleaning. She tried one a few years back and said some of her cats were so put-off by its sounds and movements that they refused to use it. Bear, one of her larger cats, was so unnerved that he would try to smack it.

If aesthetics are important to you, there are plenty of litter boxes available that resemble furniture, including some disguised as end tables, cabinets or planters. But don’t lose sight of the most crucial thing, “It’s important for the cat to have enough room to move around inside and feel comfortable,” Benjamin said.

Once you have the right box, you’ll need the right litter. Just keep in mind that if you decide to swap the type you already use, you’ll have to keep an eye on your pet, since cats can get anxious about change. Try easing yours into the new stuff by gradually adding more of it to the box with each cleaning.

The first question to consider when shopping for litter is clumping or non-clumping? In small spaces, the answer is almost always the former, since the non-clumping kind needs to be completely dumped and replenished much more frequently (a pain when you have limited access to trash removal and few places to stockpile an extra litter supply). The main drawback of clumping litter, however, is that it’s dusty. That’s why Benjamin tends to use it only in the seven litter boxes on her “catio” – her screened-in porch, which she has given over to the felines, naturally.

For her indoor boxes, Benjamin uses crystal-style litter, which absorbs liquids and traps odours, but throws off less dust. The downsides are that it needs to be replaced more often, and its granules are sharp under foot.

One thing Benjamin studiously avoids: scented litter. Cats have a strong sense of smell and might find the scent objectionable. Plus, as Benjamin wisely points out, “Masking the odour isn’t really taking care of it.”