Brunei Darussalam’s squash player Lim Kok Sheng fought admirably in the men’s open consolation event quarterfinals of the 3rd Squash Thailand Open despite being nagged by injury but ended in retirement in the deciding set against Indonesia’s Dheny Chalvin at the Ambassador City Jomtien in Pattaya, Thailand yesterday.

The squash player encountered problems with his ankle but managed to claw his way back into contention having edged the Indonesian in the fourth set to bring the game to a decider.

Dheny clinched the opening set 11-8 before Lim matched him with an identical set score in the second set. The Indonesian moved in front in style with a 11-2 set win before the Bruneian battled back.

The Bruneian shocked the crowd including his coach after recovering from a 4-0 deficit in the fourth set and caused his opponent problems.

His coach Pengiran Hasnan bin Pengiran Anak Haji Rozanan heaped praise and labelled his heroics in the fourth set as the best he has seen from him.

Pengiran Hasnan said, “Lim performed his best in the quarterfinals. He managed to overtake his opponent’s game plan in set two. He started to get his moves but then he started to feel pain in his ankle.

“He didn’t realise when he made the wrong step. He started to lose momentum in set 3. In set 4, I was not expecting him to push himself.”

He continued, “He made his opponent struggle moving front and back of the court. I’ve never seen him play that way before. It was simply the best I’ve ever seen.

“In the decider, it was a bit tough for him to move his leg. Then he decided to call off the game and retire.”

Number one seed Japan’s Tomotaka Endo booked a berth in the last four of the men’s open event after he navigated his way past Malaysia’s number five seed Mohd Farez Izwan in an 11-5, 13-11, 6-11, 11-6 win.

He will meet Philippines’ number three seed Robert Andrew Garcia for a place in the final.

Meanwhile, in the other side of the draw, Japan’s number two seed Naoki Hayashi will play Malaysia’s sixth seed Elvinn Keo in the semi-finals. 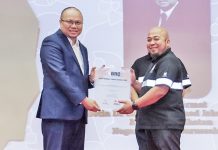 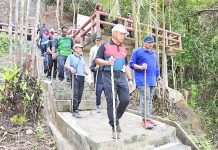