TRIPOLI (AFP) – In alleys criss-crossing the Libyan capital’s Old City, construction crews are hard at work restoring former glory to architectural treasures neglected under ex-dictator Moamer Kadhafi and in the decade since.

Pushing wheelbarrows, a clutch of workers ferry sand, dismembered concrete or gravel, and others dig or hammer away, bent double or down on one knee.

The din of pick axes stops suddenly, however, as calls to prayer echo around the ancient buildings. Workers down tools in silence, while cafes empty, as everyone heads to their place of worship.

The substantial restoration underway seeks to “preserve the heritage of the Old City” in Tripoli, said head of the management committee overseeing the project Mahmoud al-Naas.

Covering around 50 hectares, the Old City is an “architectural joy” – but this makes the “enormous” work required a “heavy responsibility”, he said.

The project, funded largely by the state, comes as Libya is undergoing a tentative political renewal. 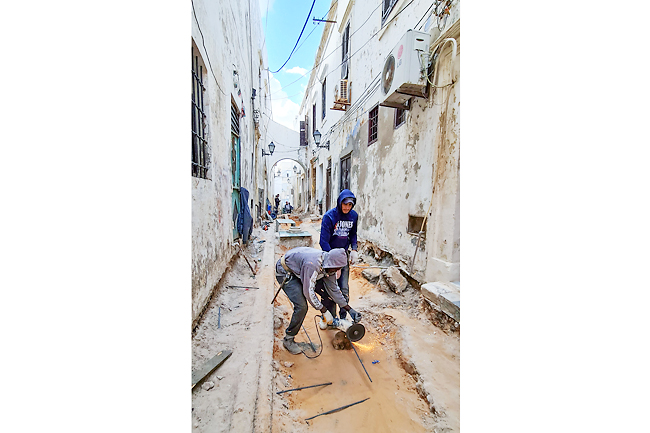 New Prime Minister Abdulhamid Dbeibah, was selected earlier this year through a United Nations (UN)-backed inter-Libyan dialogue to steer the North African country to December elections, bringing hope that unrelenting chaos since Kadhafi was ousted and killed in 2011 might finally end.

Unlike past restoration work – including largely unsupervised and sometimes botched attempts in the mid-1990s and about a decade later – latest efforts ban cement and concrete, wherever possible.

Built by the Phoenicians in the seventh Century BC, Tripoli’s Old City has passed from civilisation to civilisation, notably the ancient Greeks, Romans and the Ottoman Empire.

When Kadhafi decided to ban private sector-led development in the late 1970s, workshops and speciality stores alike lowered their curtains for good.

In an instant, know-how that had been passed down from generation to generation was painfully rendered obsolete.

Long-resident families gradually drifted away, despite fleeting attempts to stop the rot in the 1990s.

But others look to a brighter future.

Mohamad al-Ghariani, 76, an artist and painter who owns a gallery in the sector, said the ongoing “improvements… revive the soul of the city that we knew as children”.

“The restoration is progressing from district to district,” he said, pointing with enthusiasm to the restoration of a cultural centre for children, known as Dar Krista.

Built in 1977, it is named after renowned Tripolitan artist Abdallah Krista, who produced songs and cartoons for children, and sits within a group of buildings originally erected in 1664 by Osman Pasha Karamalli, descendant of the Ottoman dynasty that ruled Tripoli for centuries.

A few parts of the Old City’s east side have withstood the ravages of time.

The gold and silk markets still attract custom to their covered alleyways and arcades, while its citadel serves as a museum.

Then there is the famed Arch of Marcus Aurelius, its date palms and the minaret of the Gurgi Mosque – the perfect backdrop for a souvenir snap.

Forsaken corners that up until lately served as open dumps have morphed into huge construction sites overseen by architects, historians, specialist tradesmen and artists.

“The opinion and expertise of everyone counts,” said resident Al-Mahdi Abdallah.

Squatters who for many years occupied numerous abandoned buildings have been moved on, often leaving their own haphazard building work or ruins in their wake.

In some places, the walls of old buildings awaiting facelifts are bolstered by wooden beams that extend across alleyways like bridges.

Defying the dangers of a dugout street, children dart around at full pelt, as an adult scolds them. But “all the elders are keeping an eye on them”, so they are safe, said Abdallah.

“That’s the benefit of living in this community, which, little by little, is putting itself together again.”

The already refurbished waterfront at the northern edge now boasts pavements and a completed road.

Gone are the potholes that turned the street into a muddy alley on rainy days.

The facelift mirrors signs of political progress in the conflict-wracked country.

Dbeibah’s new government replaced two rival administrations based in Tripoli and the country’s east, the latter loyal to military strongman Khalifa Haftar whose forces tried but failed to seize the capital in a 2019-20 offensive.

“The Old City is coming back to us,” rejoiced Mohamad Nasser, whose seafront shop selling fishing and diving gear is a prime beneficiary of the restoration work. “It was about time!”