BERLIN (AP) – Bayer Leverkusen will be aiming to maintain its Bundesliga challenge longer than it did the last time it hosted Bayern Munich.

The teams are level on points at the top of the league going into Sunday’s match. Although it’s only been seven games, Leverkusen’s start is giving grounds for optimism under coach Gerardo Seoane.

But it was a similar story last year. Leverkusen was unbeaten and at the top of the Bundesliga after 12 matches before Bayern’s visit on December 20. The home team got off to a great start with Patrik Schick scoring early. Then Robert Lewandowski equalised before the break and capitalised on a mistake from Jonathan Tah to score a dramatic winner in the third minute of injury time for Bayern’s 2-1 victory.

Bayern took over as leader and went on to claim a record-extending ninth consecutive title, while Leverkusen slumped under then-coach Peter Bosz. Bosz was fired in March after 10 losses in 17 games across all competitions, with Hannes Wolf taking over until the end of the season, when Leverkusen finished sixth.

Tah said it will be different this time.

“The last time we kind of tripped up,” the 25-year-old defender said. “I’m sure it won’t happen to us now.”

Tah said the team is benefitting from Seoane’s input. Leverkusen has only lost once since the former Young Boys coach from Switzerland took over – a hard-fought 4-3 setback at home against Borussia Dortmund.

“The coach has changed a lot in the dressing room,” Tah said. “I have the feeling that something is changing, in a positive way. It’s impressive.”

Leverkusen routed Arminia Bielefeld 4-0 in its last game before the international break. Bayern was surprised in a 2-1 loss at home against Eintracht Frankfurt.

“We can be proud. At the moment it’s a lot of fun to play for Bayer Leverkusen,” goalkeeper Lukáš Hrádecký said after the win in Bielefeld. 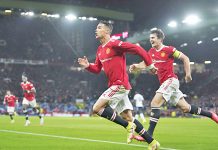 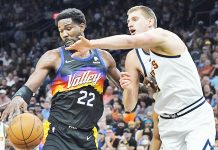