THE WASHINGTON POST – There are 250 dogs on Scott Arnold’s United States (US) Postal Service route, and every year, he gives each one a personalised holiday stocking that has their name, dog treats and a note from Santa.

But for the first time in 25 years, Arnold thought he might skip it this year. He knew that the families in the 22101 ZIP code area of McLean, Virginia, would have understood. Arnold, 66, lost his adult son, Jason, in May of unknown causes, just days before his 37th birthday.

Arnold said that an outpouring of love and support from hundreds of his longtime customers helped fuel him through a difficult year. But he wondered whether he had the energy to make and deliver hundreds of stockings.

“It’s been an exhausting year and the holidays are especially difficult,” said Arnold, who has delivered mail for 38 years.

Then Arnold thought about how much his son had loved dogs, and he knew he had to continue the tradition he calls ‘Santa Paws’. 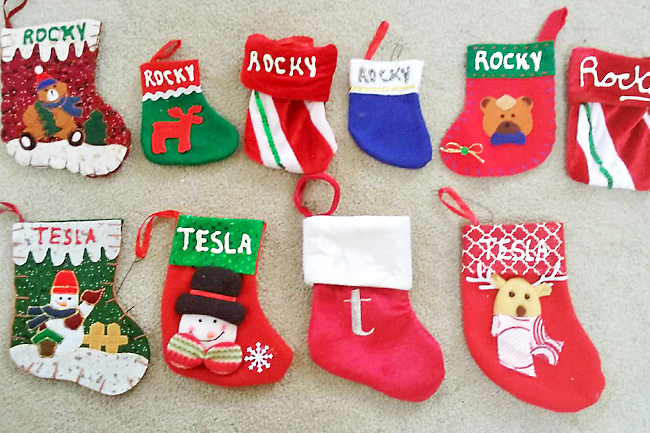 “I decided that doing the socks this year would be a good distraction from the sadness and would be a nice way to honour Jason and Cash,” said Arnold, explaining that his daughter’s black Lab Cash had died recently of cancer.

“The socks have meant a lot to people over the years,” he added.

So in November, Arnold bought more than 250 miniature holiday stockings that were decorated with Santas and snowmen. He pulled out his red and green fabric paint, and sat down at his table to personalise each one carefully. “Rocky”, “Finnegan”, “Tesla”, he began, until he had written one for each pooch he has come to know and love in McLean, a Washington suburb.

This charming, yet time-consuming, tradition started in the late 1990s when he realised he’d been asking each dog on his route, “What are you going to get for the holiday?”

“That first year, I gave socks to 40 dogs, and it really caught fire,” Arnold said. “Now I have 250-plus. I know all of their names and they know mine, too. I think they know me better than their owners, sometimes.”

As he does every year, Arnold stuffed each stocking with dog treats, then added a few extras: photos of his dog, Milo, and his grandsons – Jackson, eight, and Luke, six – and a special holiday newsletter.

“Another Pawliday season is upon us, though this one is quite different than any other,” Arnold wrote. “We will begin, as always, welcoming the new members of our ever-growing pack.”

After listing all of the new dogs in the neighbourhood (Teddy, Daisy, Biscuit, Lula), he mentioned those that had moved away (Molly, Rosie, Zeus, Monte), then paid tribute to all of the dogs that had crossed the ‘Rainbow Bridge’.

“A really rough year,” Arnold wrote after listing 18 names, including those of Luna, Max, Bubba and Saint. “Let’s offer a moment of bark-free silence in their memory.”

On the other side of the letter, he thanked the people on his route for their support and kindness during the worst year he could remember. “The outpouring of caring and compassion from all was incredible and appreciated,” Arnold wrote. “It helped so much, and continues to help.”

When he began delivering the socks about two weeks ago, Arnold said, he discovered it was good therapy.

“I’m so glad that I didn’t deprive the families and their dogs,” he said. “They look forward to the socks every year. We’re all feeling overwhelmed because of the pandemic and this was something positive I could do.”

The customers on his route are grateful to have a canine-loving carrier deliver their packages during the holiday and year-round.

“Scott is one of a kind,” said Ofelia Fernandez, 71. “If he has to deliver a package by your front door, he leaves a dog Milk-Bone on top of it.”

Michele Peterson, 62, said she never knew her mail carrier before she moved to Arnold’s delivery route.

“Scott immediately introduced himself to me and wanted to know our dogs’ names,” she said. “For all of my dogs over the years, he’s been their favourite person. If we’re out walking on the street, he’ll throw them some bones.”

Rahul Ravi said he was touched by the note Arnold left in the stockings this year along with treats for his dogs, Loki and Finnegan.

“It was a letter so poignant, it made my wife cry,” he said. Ravi was stunned that Arnold took the time to carry on his ‘Santa Paws’ tradition after the death of his son.

“He decided to (make the stockings) anyway, because he remembered how much his son loved dogs,” he said. “He wanted to carry on bringing hope to families even in this horrible year.”

Once he finishes delivering the crush of last-minute holiday parcels, Arnold said, he will relax on the actual day.

A time is approaching, he said, when he will consider retirement.

“As I get older, I hate the cold and working in the snow,” he said. “Will this year be the last? I don’t know. It’s a tough call. The people on my route are like family. And I guess it goes without saying – so are the dogs.”