THE WASHINGTON POST – For decades, science fiction writers have been drawn to the subject of ecology: the study of the interconnection between living beings and their environment. The T-Rex of them all is of course Dune. Frank Herbert’s 1965 classic is epic in scope, yet intimately concerned with the compelling if imaginary ecology of the desert planet Arrakis. Several more novels followed, but Dune stands apart, an enduring classic of 20th Century science fiction.

More recently, authors like Kim Stanley Robinson and Jeff VanderMeer have explored environmental matters gone wildly awry. VanderMeer’s Area X trilogy has been a runaway bestseller. Kim Stanley Robinson’s Mars trilogy is considered a cornerstone of modern science fiction, tracing the terraforming of Mars over centuries. In novels like Forty Signs of Rain, he tackled Earth’s own environment with great passion. Matt Bell’s Appleseed continues that tradition with a take on climate change over the next millennium. So, what other science fiction and speculative novels – old and new – have caught our attention?

Lavie: I’d be remiss not to mention the one that started it all. Stanley G Weinbaum had a short but distinctive career, dying tragically of cancer at just 33. His short story A Martian Odyssey may read a little awkwardly in places due to its pulp nature – it was published in 1934 in Wonder Stories – but it changed the science fiction field. An astronaut on Mars encounters an alien, but it is unlike any that appeared before. Weinbaum’s Mars is truly alien, its ecology its own, and his astronaut must puzzle the intricate relationships between creatures and habitats. Goodbye, bug-eyed monsters: Welcome, modern science fiction. Few people get to create something new. Weinbaum did, and has a crater on Mars named in his honour. I recommend The Best of Stanley G Weinbaum for anyone interested in the history of science fiction.

Fast-forwarding to 2014, let’s talk about Wu Ming-Yi’s The Man With The Compound Eyes. translated by Darryl Sterk. The book is intimately concerned with the fragile ecology of an island which is threatened by a trash vortex. Finnish writer Emmi Itäranta’s Memory of Water, also from 2014, beautifully follows the life of a tea master in a world where water is scarce. Australian novelist James Bradley has been quietly marking his own territory on the other side of the world with haunting novels like Clade (2015) and Ghost Species (2020), which are deeply concerned with the environment and our rapidly changing world. He might remind you of VanderMeer.

Silvia: VanderMeer has certainly woven ecology into his fiction. In his latest novel, Hummingbird Salamander, where the world is at the precipice of an ecological disaster. The book only has a dash of science fiction compared to its predecessors, so I would recommend it for people who prefer mysteries and conspiracies over science fiction.

Sheri S Tepper is not a name you hear much these days, despite her large body of work. Tepper, who died in 2016, is best known for the novel The Gate to Women’s Country (1988); she won a Locus for her fairy-tale Beauty (1991). But I’m recommending a different book today: Grass. It takes place in a future in which humanity has established colonies across the universe. A deadly plague threatens all planets except for one: a world of “numberless wind-whipped tsunamis of grass.” The theocracy that rules the galaxy wishes to discover the secret keeping Grass safe from disease. It sends envoys to the planet with the hope they will be able to court the favour of the aristocrats who maintain European mannerisms and control the land. It’s an imaginative novel that balances religious and ecological questions.

Like VanderMeer and Tepper, Margaret Atwood combines a plague with ecological concerns in Oryx and Crake. Though the 2003 novel is perhaps infamous in science fiction circles because Atwood labeled it “speculative” rather than “science fiction”, it should satisfy readers who like near-future and post-apocalyptic novels.

Salt Fish Girl (2002), by Larissa Lai is a strange blend of fantasy and science fiction, switching between the future Pacific Northwest where bioengineered humans are a reality, and 19th Century China. The poetic nature of the novel, as well as the genre and time shifts, might test the patience of readers seeking clearly delineated science fiction narratives, but it’s worth a look. Lai recently returned to science fiction with The Tiger Flu (2018), which features a plague. Maybe eco science fiction and plagues just seem to go together?

Lavie: I think I’ve had enough of plagues for a century or two. And there are other fish in the water – or if not fish, aquatic creatures that would definitely kill you in Neal Asher’s full-throttle The Skinner (2002), easily one of his best, set on a watery planet where, yes, everything is deadly. It’s terrific fun – which is more than I can say for the year we’ve just had! 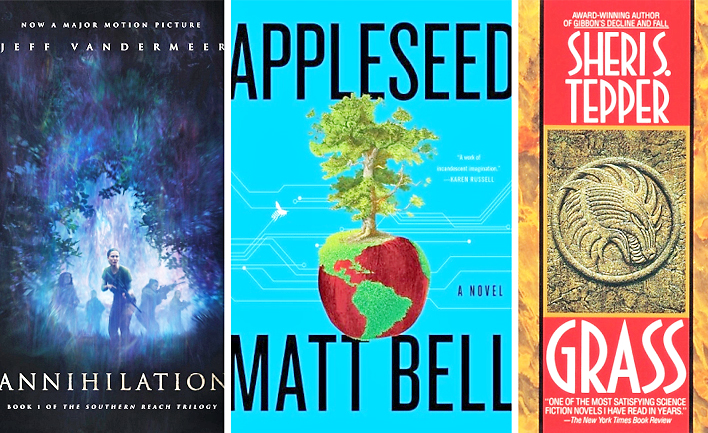