Amitav Ghosh made history in 1997 as the first Indian author to win the Arthur C Clarke Award, for The Calcutta Chromosome. But Ghosh is just one of many writers of must-read Indian science-fiction and fantasy novels.

Thankfully, many of these books are becoming more available to American readers – let’s hope this trend continues.

There are many traditions of science fiction in South Asia, in several languages. Runaway Cyclone, by the brilliant polymath Jagadish Chandra Bose, first published in 1896 and anticipating the concept of the “butterfly effect”, is one of the earliest examples of Indian science fiction.

A fantastic introduction to the Tamil pulps is The Blaft Anthology of Tamil Pulp Fiction edited by Rakesh Khanna and translated by Pritham K Chakravarthy. It really is a blast. A more recent anthology is The Gollancz Book of South Asian Science Fiction edited by Tarun K Saint, which includes several new translations.

Two venerable champions of the form are Anil Menon and Vandana Singh, both of whom have published widely in short fiction. Menon’s 2009 novel, The Beast With Nine Billion Feet, dazzles with its vision of 2040 India, while Singh’s most recent collection is the terrific Ambiguity Machines and Other Stories. 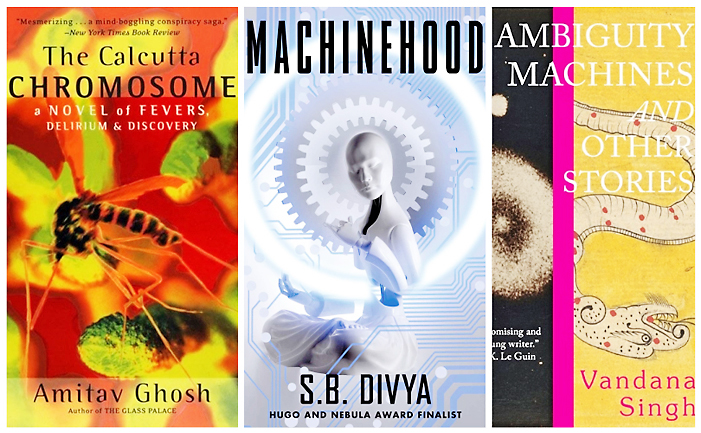 (Singh is physicist, and her science fiction tends to be both hard and lyrical.) On the fantasy side, it is hard to ignore the indefatigable Ashok Banker, whose multivolume epic fantasy retelling of the Ramayana – beginning with 2003’s Prince of Ayodhya – was published by Orbit in the United States, a move that was somewhat trailblazing for Western publishing of the time. His most recent novel in the United States is Upon a Burning Throne.

So who are the bright new writers reimagining Indian fantasy and science fiction today? What books can we look forward to?

SB Divya’s Machinehood was published this month. Divya’s 2016 novella Runtime was a Nebula finalist. Machinehood is thriller that has humans competing with robots for jobs in a ruthless future economy.

If you’re one of those people who says there’s nothing new in science fiction being published anymore, here’s a book that disproves that.

Another recent title is Night Theater by Vikram Paralkar. Originally published in 2017 in the United Kingdom and rereleased in 2020 for the American market, it’s a bizarre, surreal story about a doctor in a small Indian village who must operate on the corpses of three people before sunrise so that they can come back to life.

Despite this synopsis, it’s no Frankenstein tale and functions as a quiet, philosophical exercise. Paralkar, an oncologist, is also the author of a bizarre short-story collection titled The Afflictions which assembles a treatise of imaginary diseases. And talking about short stories, there’s Kuzhali Manickavel’s collection Things We Found During the Autopsy.

Like Paralkar, these tales are definitely Weird with the capital W.

Manickavel is a wonderful writer, a true original – and very funny, too. As for Divya, it’s worth pointing out her collection, Contingency Plans for the Apocalypse is excellent, with stories like The Egg both heartbreaking and strangely hopeful. Published by Hachette India, the book is not widely available in the US, unfortunately.

Global publishers like Hachette and HarperCollins have expanded into India in recent years, which has contributed to a homegrown market for science-fiction titles, but I’m hoping these books will reach a wider audience soon.

Another wonderful book is Analog/Virtual by Lavanya Lakshminarayan.

Set in a renamed, divided, futuristic Bangalore, this is a virtuoso mosaic novel that takes on themes of conformity, climate change, corporate greed, rebellion and the digital world. You find yourself falling into its strange dystopian world without even realising it.

Another recent title is Samit Basu’s near-future Chosen Spirits, an angry look at politics and surveillance in modern India.

Basu’s career includes children’s books, fantasy novels and the tongue-in-cheek Indian superhero novels Turbulence and Resistance. He also wrote comics with Mike Carey, and even directed his own Bollywood movie for Netflix last year. It’s quite the résumé! I understand that Chosen Spirits will be getting a US edition next year, so that’s something to put on your literary calendar

For a tasty horror morsel, try The Devourers by Indra Das. It focuses on a group of shape-shifting creatures that consume humans. Told as a sort of story within a story, it gets quite disturbing and bloody.

Finally, Gautam Bhatia debuted with The Wall last year. The first part of a duology, it is set in a huge city enclosed by a gigantic, unscalable wall and has drawn comparisons to both Isaac Asimov and Ursula K Le Guin.

Like other titles in this column, this comes from an Indian publisher, in this case Harper Collins, but is easily available as an e-book.