AFP – A game that’s easy to pick up and more accessible than tennis, pickleball is all the rage in New York, as the sport snags investors and grows increasingly professionalised across the United States (US).

On a recent weekday evening at the foot of the Brooklyn Bridge, dozens of players ranging from 30-somethings to retirees shared the four new courts at Brooklyn Bridge Park, which recently replaced the bocce ball courts.

Teams form spontaneously as players wait their turn at the park space that offers a unique view of the city’s brightly lit skyscrapers.

“You come here, put your paddle over there, and you get to play with a range of people, beginner and intermediate,” said 52-year-old Amy Zhao with a smile.

With its neon perforated plastic ball, flat paddle rackets and obligatory underhand serve, pickleball is a kind of “mini tennis”, especially due to its smaller-sized court.

It’s also much cheaper: David Masters took up pickleball when he realised it cost USD100 to snag a spot to play tennis at a New York public park.

“And also, you had to wake up at like 6am just to reserve a court,” said the 31-year-old software engineer. 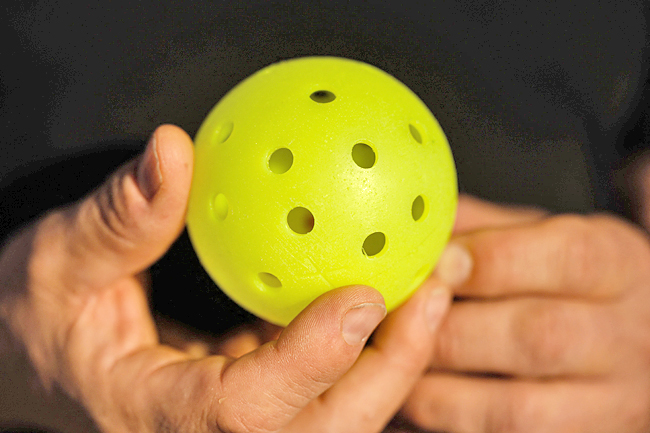 Beyond tennis, pickleball takes on airs of both badminton and ping-pong, with lighting-fast exchanges that demand quick reflexes.

What’s more, players must strategically position on the court: competitors can’t hit the ball before it bounces if it lands in a non-volley zone that’s just in front of the net.

The game was invented in 1965 by three fathers in the state of Washington. In February, the Sports and Fitness Industry Association deemed it the fastest growing sport in the US, with 4.8 million regular or casual players in 2021, up 39 per cent from 2019.

The growth in New York is visible, with new courts popping up throughout the city and where private coaches have even become in demand, some running upwards of USD75 per hour.

“During the pandemic, people wanted to get activities. And it felt like pickleball was one that checked a lot of boxes,” said 33-year-old Karim Kerawala. “It let them be outside and let them compete in something that didn’t require a tonne of exercise, unless you wanted… higher level play,” Kerawala said.

Calling pickleball his “new obsession”, he said a meet-up app saw membership go from around 200 to nearly 2,000 in one year.

A number of “professional” circuits have already arisen, including the APP tour that was founded in 2019. At the end of May the league organised a tournament at Flushing Meadows, on the grounds of the US Open.

According to Ken Herrmann, founder of the APP Tour, interest and skill is such that qualifying tournaments are starting to become necessary for professional events.

The competing PPA Tour, found in 2018, signed exclusive contracts with the 24 best players in the sport, both men and women.

They distributed USD3 million in prize money in 2022, a sum that could double in 2023, said PPA Tour’s content director Hannah Johns.

“It’s been absolutely crazy, how much it’s taken off. And a lot of that is because we were able to get bigger sponsors and broadcast partners involved,” Johns said, citing CBS, NBC and ABC among the networks and the car rental company Hertz as a brand.

Major League Pickleball announced this week it’s joining forces with LeBron James, who is purchasing a team as part of an ownership group that includes fellow basketball champion Draymond Green.