BLOOMBERG – Starting this year, Nintendo fans can step through a life-size warp pipe and enter the Mushroom Kingdom for the first time on American soil.

Super Nintendo World, an interactive replica of Nintendo’s dynamic lands and characters, will bring its colourful chaos to Universal Studios Hollywood when it opens on February 17, 2023.

The expansion provides an opportunity to race alongside Mario and Luigi before meeting them face to face, and it will bring video game-inspired dining, retail and merchandise to the California theme park inside an immersive, bowl-like structure lined with spinning coins and turtle shells.

An early preview tour of the land as it finalises construction reveals the layered facade set to a chirping soundtrack of cheerful instrumentals and distant coin clinks. Whether Koopa Troopas in motion or a fake desert set against the actual skies, there’s always something to look at – and somewhere intriguing to head first.

Its marquee attraction, Mario Kart: Bowser’s Challenge, puts riders in augmented reality-enabled helmets to experience the Mario Kart racing game firsthand while the challenge plays out virtually in front of them.

For those craving a more hybridised experience between their home devices and the theme park land, a deeper level of gameplay can be accessed throughout Super Nintendo World by way of Power-Up Bands. The wearable wristbands are offered in simple, cartoonish designs that reference popular characters: Mario’s sports a red ‘M’ and two dots from his overalls; Peach’s is pink with a crown logo. They enhance one’s visit by keeping track of in-land scoring and are sold at a surcharge. 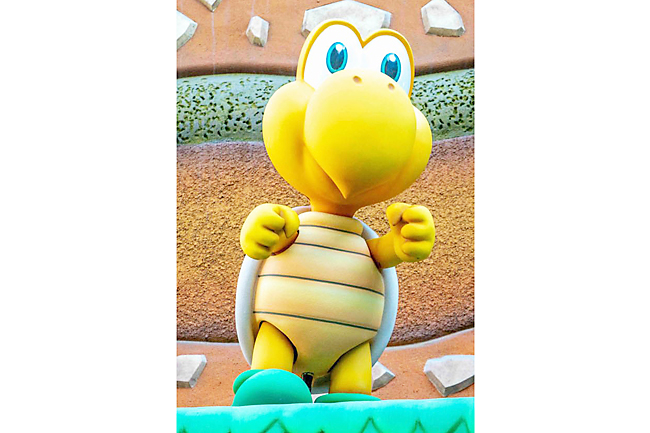 A tie-in with the Universal Studios Hollywood mobile app also allows users to collect digital coins from ‘?’ boxes and accomplish four Key Challenge games throughout the land. These side quests play directly off the land’s surrounding facade and require guests to complete actions such as correctly positioning a shell beneath a warp pipe or pulling a crank quickly enough to keep a mushroom-like Goomba atop a rolling wheel.

All culminate in a boss battle with Bowser Jr, which places participants within an interactive large-scale screen.

Power-Up Band wearers will be given a slight advantage on the land’s sole ride and deeper interactivity while meeting Mario, Luigi or Princess Peach, the land’s three fully realised characters.

But all attendees can punch blocks and re-create other moments in the Mushroom Kingdom whether or not their scores are being recorded.

You don’t need one to enjoy your surroundings, but once you see someone else mystically conjure rain or levitate items inside store windows, you’ll surely want to try.

Power-Up Bands were not provided during the preview, but in borrowing one to test a question block’s functionality, the difference becomes clear: The famous clang of a Nintendo coin being registered to my band wouldn’t have occurred otherwise. And for Universal, that sound means money in the bank.

Super Nintendo World was released at Universal Studios Japan in March 2021, but its arrival stateside marks Universal Studio Hollywood’s largest opening since its Wizarding World of Harry Potter expansion in 2016, and it’s the first of Nintendo’s notable footprints on domestic soil, The Super Mario Bros.

Movie, starring Chris Pratt and a third iteration of Super Nintendo World will open with Epic Universe, the all-new theme park arriving at Universal Orlando Resort in 2025. In each iteration, the main draw is the Mario Kart experience.

Here, riders in four-passenger vehicles will join Team Mario to compete across multiple courses for the Golden Cup – a familiar process to anyone who’s played Nintendo’s racing challenge back home.

Using head-mounted augmented reality (AR) goggles and technology developed specifically for the ride, participants will witness Mario race alongside them before seamlessly transitioning on-screen in a blend of AR, physical sets and projection mapping. (A lengthy queue weaving through hand-painted Yoshi’s Island motifs and culminating in a hyper-detailed walk-through of Bowser’s Castle is but one indication of its imminent popularity).

Nintendo World reps say each race is unique, offering different outcomes, scores and, most important, repeated rideability, something inherent to the video game on which it’s based.

The entirety of Nintendo’s new land reinforces that famed and familiar interactivity, even rewarding attendees for exploration. Here, they can stumble upon eight-bit elements that illuminate behind walls, a mine tunnel filled with ‘?’ boxes or areas of discovery that lead toward surprises, such as a staircase to the Frosted Glacier territory with AR binocular views of the Whomps and Piranha Plants crisscrossing the kinetic expanse below.

Although its eye-popping colour and collision of cheerful themed worlds stand in stark contrast to Wizarding World of Harry Potter’s rooted-in-reality whimsy, Super Nintendo World boasts that same kind of overwhelming immersion, transporting people to a location they’ve previously seen, but never before in real life.

No overt competitor has yet revealed itself, but there’s still plenty to spend one’s real-life coins on, including cheesy garlic knots, mushroom soup and a tiramisu in the shape of a ‘?’ block at the Toadstool Cafe.

The 1-Up Factory gift shop offers in-land schwag such as oversize hats and themed plushies. Even taking refuge in its central hub, populated with cartoonish mushrooms in lieu of benches, remains in theme as long as the soundtrack of video game music doesn’t negate the prospect.