One lesson from the COVID-19 pandemic is the society’s need for preparedness and resilience. This has led Brunei Darussalam to develop the Bandar Seri Begawan Declaration on the Strategic and Holistic Initiative to Link ASEAN Responses to Emergencies and Disasters (ASEAN SHIELD) during its ASEAN Chairmanship in 2021, to improve coordination of existing mechanisms in ASEAN during emergencies and disasters.

His Majesty attended the 25th APT Summit as well as the 19th ASEAN-India Summit to commemorate the 30th anniversary of ASEAN-India dialogue relations; and 2nd ASEAN-Australia Summit, at the Sokha Phnom Penh Hotel, Cambodia.

His Majesty first attended the 25th APT Summit, where the monarch expressed pleasure that the APT continues to be an essential platform for cooperation including in times of crisis, as this year marks the 25th anniversary of the mechanism.

One of the mechanisms contributing to preparedness is the APT Emergency Rice Reserve (APTERR), primarily to ensure rice availability during emergencies. 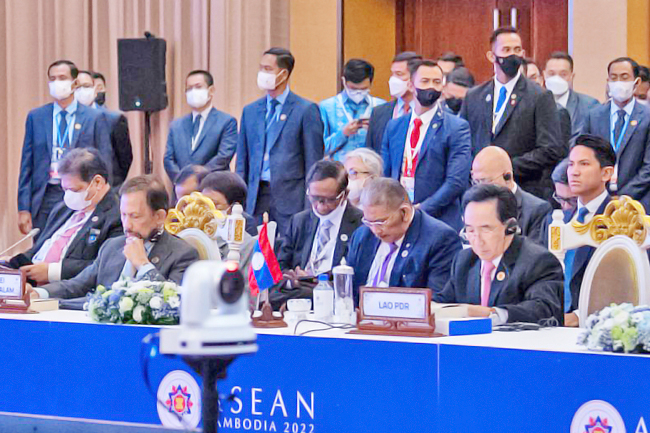 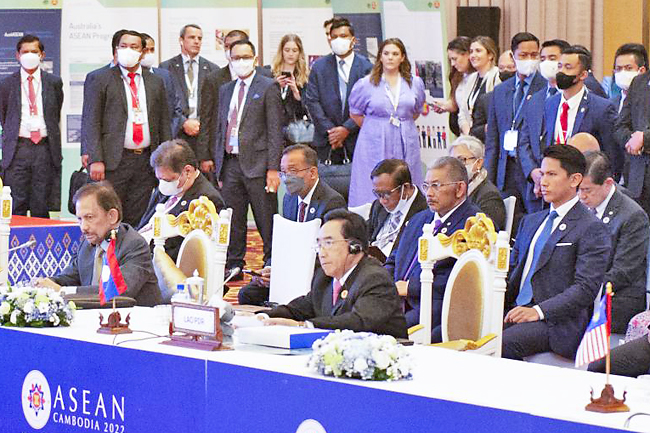 In this regard, His Majesty expressed the need to ensure that the mechanism is constantly ready and able to respond swiftly to food shortfalls in the region.

His Majesty also suggested for officials to review the preparedness of the rice reserve strategically and holistically. The monarch also emphasised that mental health is an issue that is often overlooked and can lead to significant productivity loss and socio-economic consequences in the future if left unaddressed.

As such, His Majesty welcomed cooperation of the APT to increase awareness and address the critical issue.

South Korean President Yoon Suk-yeol as country coordinator for APT Dialogue Relations, meanwhile, expressed hope for the further strengthening of cooperation between ASEAN and the Plus Three countries in facing challenges such as food and energy insecurity caused by climate change.

This was followed by a statement by Premier of the State Council of China Li Keqiang, highlighting APT’s accomplishments in the fields of food reserve and finance towards boosting its socio-economic development, as well as the stability of international and regional industrial supply chains.

Meanwhile, Japanese Prime Minister Fumio Kishida welcomed steadfast progress in new areas of cooperation between ASEAN and the Plus Three countries, such as digital economy and resilient agriculture, and emphasised strengthening of cooperation in four key areas, namely: maritime cooperation; connectivity; achievement of the Sustainable Development Goals (SDGs) and early recovery from the COVID-19 pandemic.

After the APT Summit, His Majesty attended the 19th ASEAN-India Summit to commemorate the 30th anniversary of ASEAN-India dialogue relations along with other ASEAN heads of state and government, during which His Majesty acknowledged the ASEAN-India partnership has seen immense growth, and expressed appreciation for India’s contribution to the region’s peace and prosperity.

To this end, His Majesty emphasised the need to make the ASEAN-India free trade agreement simpler, more business-friendly and responsive to economic challenges, and welcomed all parties to review the ASEAN-India Trade in Goods Agreement expeditiously.

His Majesty also highlighted the importance of investing in youth development by providing them with the necessary skill sets.

Leaders also welcomed the elevation of ASEAN-India relations to a comprehensive strategic partnership and encouraged the harnessing of opportunities in digital development, healthcare, food security and connectivity.

His Majesty expressed appreciation for Australia’s steadfast commitment to ASEAN through the Australia for ASEAN Initiatives, where several scholarships were offered to ASEAN member states, providing a foundation for closer people-to-people ties and contributing to regional resilience.

On the upgrading of the ASEAN-Australia-New Zealand Free Trade Agreement (AANZFTA), His Majesty highlighted that it is the most comprehensive agreement that ASEAN has with its dialogue partner and encouraged the conclusion of negotiations to pave way for an early implementation of the AANZFTA.

His Majesty concluded his titah by noting that ASEAN-Australia cooperation will bring meaningful and lasting benefits to the region.

Leaders also expressed support for a business-friendly environment to ensure free flow of goods and services, as well as the exchange of knowledge and experience in areas of mutual interest including digital technology and climate change.