A delegation of 16 Legislative Council (LegCo) members yesterday visited seven Agricultural Development Areas (KKP) in the Belait District as part of a series of KKP trips across the nation.

Permanent Secretary at the Ministry of Primary Resources and Tourism (MPRT) Hajah Tutiaty binti Haji Abdul Wahab joined the delegation as they met at the Tropical Biodiversity Centre.

Deputy Permanent Secretary at the MPRT Haji Mohd Yusree bin Haji Junaidi and officers from the Department of Agriculture and Agrifood and its departments also attended.

The visit aimed to provide an insight into developments in the area – especially those related to the agriculture and forestry industry, and initiatives by entrepreneurs to increase productivity and output towards realising Brunei Vision 2035’s goal of achieving sustainable food security and providing job opportunities to locals.

The first stop was at the KKP Lot Sengkuang, which has notched major development to support paddy plantation. This includes the underground water well project led by Preston Geochem (B) Sdn Bhd, launched in October last year. 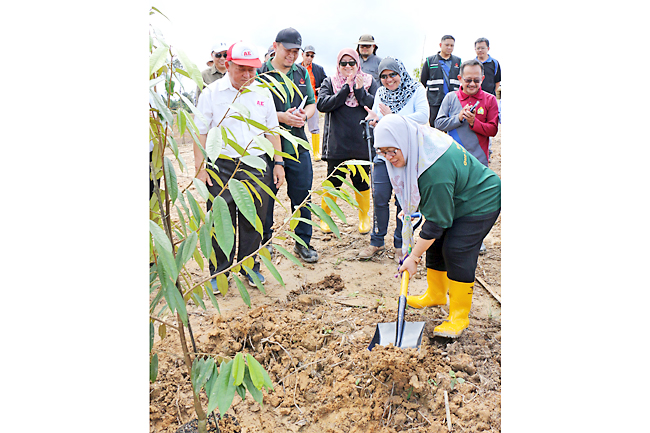 The 80-metre deep well provides a stable alternative water source for the irrigation system used for the plantation.

The paddy plantation located nearby, operated by the Mukim Consultative Council (MPM) of Mukim Labi, uses 45 hectares of its allocated 300 hectares for a variety of paddy seedlings, including the traditional Pusu, Bario, and Adan, as well as the modern BDR5 and MRQ76.

The next stop was the coffee plantation at KKP Rampayoh, operated by Pertanian Tropikal Utama (PTU).

Owner Yong Khian Fook said the 19-hectare plantation churned out BND3,700 worth of coffee produce valued at BND19,500, with the help of six workers last year.

The delegation then visited Fook Chun Farm at KKP Rampayoh, which has a plantation of Limau Kasturi and Limau Manis spanning across a two-hectare space.

During the visit to KKP Merangking, the delegation was also briefed on the new chicken hatchery and breeding farm under construction in the area, led by Golden Chick Hatchery & Breeding Farm.

Separated into two phases, 20 hectares was used for the first planting in 2019. The second phase is still in its early stages, and is projected to start this year.

The final stop was TS Wood Sdn Bhd in Kampong Sungai Mau, which houses an active downstream timber enterprise spread across 4.59 hectares of the area and operated by 73 staff.

The delegation viewed the processed products made from logged timber, which includes home furniture and fixtures.

The company estimated its downstream activities generated BND3.7 million worth of product in 2020, many of which were exported to Malaysia and the Republic of Korea.