It was part of a series of visits organised by the Ministry of Primary Resources and Tourism (MPRT). Yesterday’s visit saw the LegCo members being briefed on entrepreneurship activities and development in the agricultural and fishery industries in Tutong.

The first stop was the 200-hectare Sungai Penyatang Shrimp Farm owned by Golden Corporation Sdn Bhd. It began operation in 2002 and is managed by Richard Chuang Hsi Sha.

The company forged a joint venture with Oman Brunei Investment Company (OBIC) in 2019 to increase production capacity. It has 138 ponds, making it the largest shrimp farm in the country. 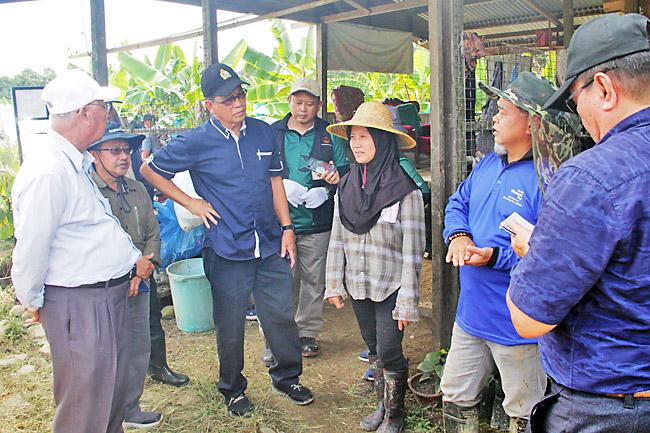 The produce is sold both locally and exported to Australia, Japan, Singapore and China.

The delegation was briefed on the company’s development before a tour of ruminant breeding and feedlot facilities.

The company employs 72 employees of which 38 are locals.

The visitors then headed to Green Technology Farm in KKP Batang Mitus. The company farms fruits, especially cavendish banana, on a 24-hectare site under a pilot project in 2018 to plant bananas. The farm is expected to start producing this year.

The company has five workers of which one is local.

The group’s last stop was Diyana ‘Aliah Enterprise at Lot 5 and Lot A in KKP Batang Mitus. The company, managed by Diyana ‘Aliah binti Abdullah, covers 10 hectares of land.

The farm was offered the site in 2019 to grow non-seasonal fruits with berangan and madu varieties of bananas as main crop.

In 2020, the company produced 4,765 kilogrammes of side crops worth BND7,875.49. It employs three workers comprising two locals and one foreigner.

The visits will continue tomorrow to agricultural and tourism sites in the Temburong District.