BEIRUT (AFP) – By challenging Lebanon’s national passion for automobile ownership, and driving growing numbers towards greener or more collective transport, the economic crisis is succeeding where everything else failed.

In the absence of a functioning public transport system, car culture has thrived and many households, even modest ones, boast multiple vehicles.

Since 2019, however, an ever worsening financial crisis has made petrol unaffordable for many and long queues at gas stations unbearable for the rest.

One of the by-products of Lebanon’s historic shortages and currency crisis is the first meaningful dent in decades in the reign of the private automobile.

Tuk-tuks, bicycles, carpooling and affordable buses – which were once out of the question for many – have since become more popular amid changing public attitudes and skyrocketing transport costs, including higher taxi fares. 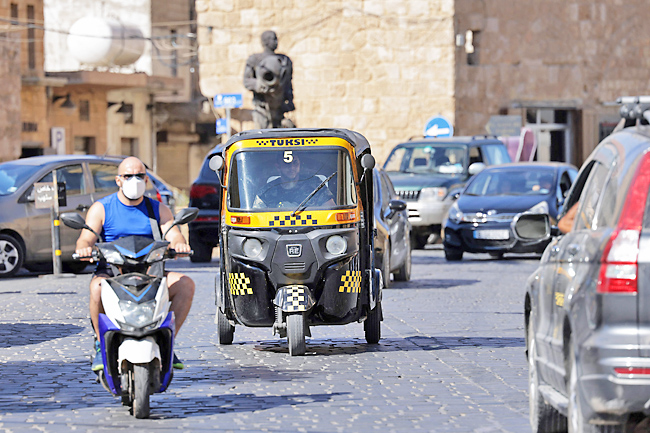 “Before the crisis, I relied on my family’s car or a taxi, but this has all become unaffordable,” said Grace Issa, a 23-year-old customer service professional whose workplace is around 20 kilometres from home.

Her only option to get to the office now is a private coach operated by Hadeer, a start-up without which she would not have accepted her new job in the first place.

“I now spend about 30 per cent of my salary on transportation instead of 70 per cent,” she told AFP as she boarded a bus to go back home.

There are more than two million cars for six million people in Lebanon. Car imports have fallen by 70 per cent over the past two years and many Lebanese can no longer afford new vehicles with the local currency losing about 90 per cent of its value against the dollar on the black market.

Dwindling foreign currency reserves have forced authorities to scale back subsidies on imports, including fuel, causing prices to skyrocket.

Twenty litres of petrol are now worth around a third of the minimum wage, while nearly 80 per cent of the population lives below the poverty line.

In response to the crisis, Boutros Karam, 26, and three friends launched Hadeer, which provides affordable bus transport along the country’s northern coastal highway.

Unlike the dilapidated public transport system, buses operate along a fixed schedule, are equipped with wi-fi and tracking services and are relatively safer for women who often report harassment on public coaches and vans.

Sixty per cent of Hadeer’s customers are women.

“The public transport problem is an old one but it was compounded recently by the fuel crisis and the fact that many can no longer afford to move around” using taxis or their own cars, Karam said.