THE NATION/ASIA NEWS NETWORK – Phra Khanong officials yesterday launched a probe after a row of shophouses on Sukhumvit Road at the entrance of Soi Sukhumvit 101/1 were seen to be leaning at an alarming angle.

On Sunday, photos of the shophouses tilting backwards posted by Facebook user Patai Padungtin sparked concerns that the buildings could collapse at any time.

“These buildings are many years old and are increasingly slumping backwards. Some of them are still open as shophouses, while others already have ‘for sale’ signs out front,” said Patai. “Authorities should investigate the buildings’ structure to prevent a tragedy from happening.”

Phra Khanong district deputy chief Warunluck Pholhan said she had instructed officials to check the structural integrity of the shophouses, measure the angle of tilt, and monitor for cracks or structural weakness.

District officials will also coordinate with the owners of Ture Digital Park and other neighbouring buildings to seek ways to secure the slumping shophouses.

“We expected to complete preliminary investigations today. The district will issue an order for immediate demolition if the building is found to be a danger to the public,” she added. 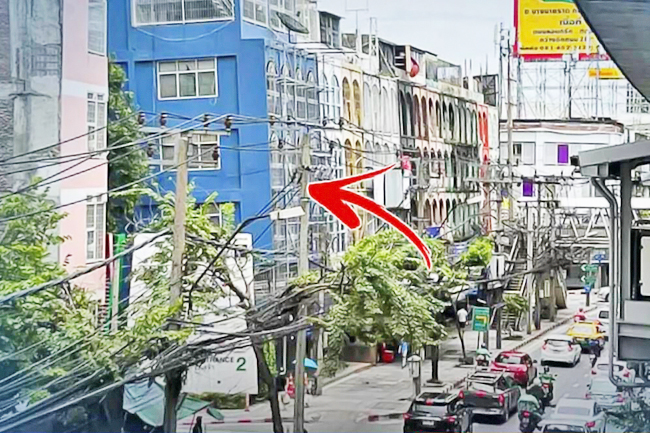